Plenty waves on offer yesterday, I surfed twice. I don't have any photos though, so here's a shot from the Christmas day at Honolua by Si Crowther from this gallery. 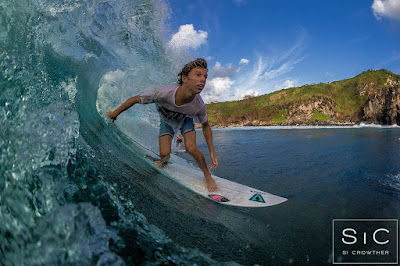 The Bay didn't quite look like that yesterday, but it had waves and it was probably the cleanest place where to surf. Not classic Bay, but plenty energy wrapping in and a bit of a current to fight to paddle back.

Both the local south facing bouys register some long period energy from the south. Anybody remember where this is coming from? I don't, so here's the wind maps of Dec 23 that shows a compact, but fairly intense fetch just attached to the eastern New Zealand.

And here's Dec 24 that shows the same fetch that became a bit wider, but not as intense. The swell should stick around at least 2-3 days. You still want to check the webcam before going to Lahaina. Always, no matter what the buoys say.

Seen the direction of the swell, we don't care about any other buoys other than the two above. The almost 9f 10s at the Pauwela tell us that there's still a lot of energy in the Maui waters. the 8f 10s at the N buoy tell us that that energy is going to stay high for the rest of the day. All the spots that like a northerly angle will work, including the queen of them all: Honolua Bay, Maui's most consistent world class wave. That means the one that more often is considered world class (like it was on Christmas). There's a bunch of others that occasionally CAN be world class, but it doesn't happen as often. How's Maalaea as an example?

Current wind map shows:
1-2) a couple of NW fetches. Because of its position and intensity, n.2 will create bigger waves for us
3) still some northerly energy out of the small low north of us. Thank you darling, you've been wonderful.

The wind is going to be a key factor today (and when is it not?). Since it's pretty late when I'm doing this this morning call, the MC2km maps are updated and I'm going to use those instead of the NAM3km that I normally use when I post earlier... they're just more reliable, IMO.
Here's the 10am one that shows some strong NE winds coming down following a front and hitting Honolua already. Give them half an hour more and they're gonna hit the north shore too. 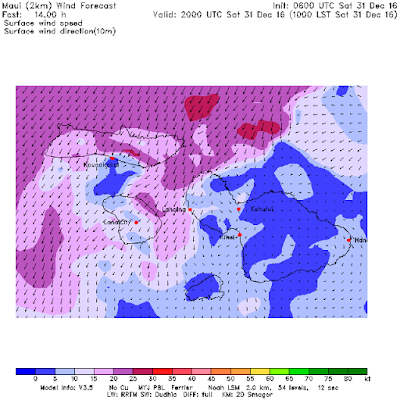 Here's the 2pm one that shows 20-25 knots from NE all over the place. Plenty wind in Kihei and on the west side. 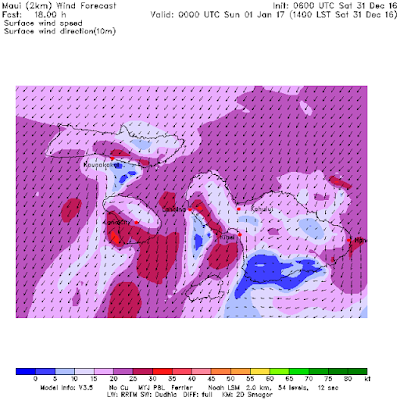 Lastly, here's a snip of the bottom of the Windguru page that shows:
1) the confirmation of the strong increment in the wind around 11am in the NAM3km model
2) a lot of rain predicted between 9am and noon by the HRM model. So hard to predict that, don't count on it to happen exactly like that.

The 6am satellite picture shows we're at the very border of the front which is moving towards NE, so it's pretty hard to tell what's really gonna happen. That's link n.6 of GP's meteo website list that you find in the right column of this blog, so check it out yourself if you care about the clouds and the rain (link n.8 for the rain radar).

Hey GP,
Couple things you might find interesting on this rainy day:
- I belive you like weather related blogs (you being one of them), so if you don't know it yet, check out cliffmass.blogspot.com (Cliff is a UW meterologist).
- Cliff frequently discusses weather models and which work best for various scenarios. Mainly he points out that the european model (ECMWF) is now superior to the US model (GFS) under most circumstances, for various reasons. Much about this here http://cliffmass.blogspot.com/2016/06/us-numerical-weather-prediction-is.html
- He also mentions that the NAM is particularly poor both short and long range and the community based (open source) WRF model is often much better. Note that the Haleakala Weather Center uses WRF http://weather.mhpcc.edu/wrf/maui2/wind.html
Which is one reason the Haleakala Weather Center is much better for the wind prediction.
- You still have links to flash based satellite loops, such as
http://www.ssd.noaa.gov/goes/west/hi/flash-ir4.html
but most browsers and OS have dropped support for flash. You should change these links to the HTML5 (non-flash) version, such as
http://www.ssd.noaa.gov/goes/west/hi/h5-loop-ir4.html
I believe you only have to replace flash with h5-loop and you're good.
Aloha! - ben

thanks a lot Ben! Whenever I'll find the time I'll check everything you linked.