The morning surf looked allright yesterday (the trades had a really easterly start), but I was late and my only water activity was windsurfing in the afternoon.

As you can see from the photos below by Jimmie Hepp from this gallery, the wave size went down a bit compared to the previous 3 days, but there were still some solid ones. Windsurfers call that size logo high for obvious reasons. 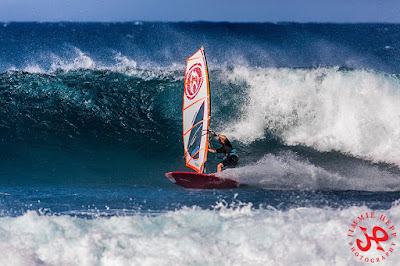 Surfers call that head high for as obvious reasons.
Let's all do that and free this island from the non sense Hawaiian scale. 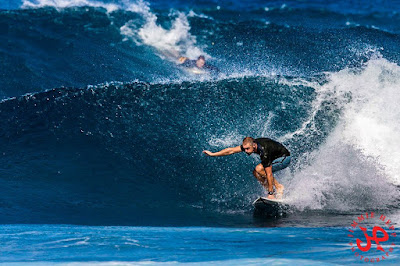 Finally a proper southerly reading at Barbers, it has been a while since we saw one. But there has been waves on the Lahaina side already for a few days. That's why I always say to check the webcams no matter what the buoys say. The buoys are key if you want to hit the water at dawn and need to choose a spot when it's still dark. If the sun is out, it's always good to check the buoys to have an indication, but the webcams will give you not only the size, but also the consistency (if you watch them long enough), wind and crowd.

Something else that would be good to know is where the waves come from. At the moment, there's a mix of windswell and a long period ground swell coming from a fetch SE of New Zealand that I circled in the wind maps of Dec 18 and 19, that I propose again below. To the benefit of the new readers (47k page views in the last month!), it takes about 7-8 days to get from down there to the Hawaiian islands (right upper corner). More about travelling times in general in this post labeled "NW buoy to Maui travel time and shadowing angles", available together with other interesting stuff, in the "labels" section on the right column of this blog.

No more NW swell at the NW buoy and only small energy left at the local buoys. Today is going to be a relatively small day, before the new extra-large NW swell starts filling in overnight. Hookipa will still have chest to head high waves. At least I hope! Stay tuned for the beach report that today will be at 6.30am sharp, since I have to do a surf guide at that time.

Current wind map shows:
1) a wide but not particularly strong NW fetch. This has nothing to do with the much closer and more compact fetch that generated tomorrow's XL swell. That one is north of us but now aiming at Alaska and Canada and, as a result, that XL swell is only going to last 2.5 days. Today's fetch instead will generate a swell that Surfline is calling to peak at 6f 15s in the night between Tuesday and Wednesday.
2) a not particularly impressive windswell fetch, which is going to improve the next few days because of the very strong wind that is about to start blowing soon. See the windguru table below, right after this.
3) a weak fetch east of New Zealand that is not going to do much for us. I circled it anyway, so that you guys can learn which ones are strong enough and which ones are not.

Windguru's 10 days outlook shows a very windy White caps Christmas. At least it's going to be easterly, which is not the worse for the waves at Hookipa. Right after it, a couple of days of NE wind, which will most definitely cause havoc on the whole north shore (Dec 29 and 30). And right after that, something to look forward to: the calm.