Just a morning session for me yesterday, it was too windy for anything in the afternoon.

Well, that's for me of course. Browzinho didn't mind the strong wind and the wild conditions that it created. 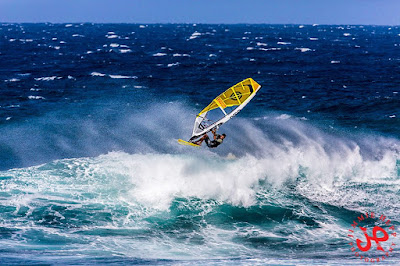 Kai Lenny first went out with a Jaws gun (and had fun hitting lips!) then he went sailing. Photos by Jimmie Hepp from this gallery. 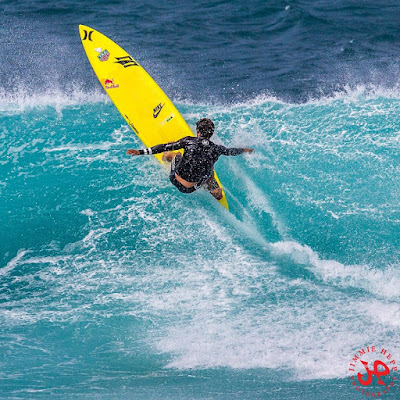 That's how gusty it was at Hookipa. No thanks.

This are a couple of gopro shots from Sunday at Honolua. On my first wave I had two guys dropping in. Eventually they both kicked out, but the wave was ruined. Didn't get pissed off at all, that's part of the game when the Bay is good.

And that's how close I got to get barreled: not even. I love the cliff on the background.

4am significant buoy readings
South shore
Nothing at the buoys, check the webcam, there were definitely waves yesterday. There have been waves for the last few days, actually, and I've been wondering where they were coming from. By looking at the past week's wind maps, the most likely source seemed to be a fetch associated with a strong high pressure ENE of New Zealand that sat almost stationary for 4-5 days. In Dec 21st call, I finally noticed it (number 5) and labeled it "too weak to really do something for us". I even failed to circle it right. Notice how it extends to almost 20 degrees of latitude south.

The Surfline buoys page link n.11 (I removed the bible reference because someone will get offended at one point) is a great tool, but you need to always read them with a very critical approach. Obviously, remembering the fetches would help have a better idea of where the waves are coming from. You can scroll down to the previous days and check the "current wind map" section if you are curious. I'll leave that to you, because instead I want to insist on how accurate the Surfline "Offshore Swells" tab (link n.15) has been.
On the left it's the graph of Pauwela, on the right the Surfline forecast of three days ago. I numbered the three swells of interest so that you can compare them (please disregard every other line):
1) the Christmas swell looks exactly how it was predicted
2) the windswell at the Pauwela buoy has been a couple of feet less than predicted, but qualitatively the graph was correct
3) the new NW swell is picking up just as predicted. Don't forget that that forecast is 3 days old. In the meantime, the models have changed their outputs and now the predicted size of this new swell at 8pm not 5.7f anymore, but only 4f 15s from 319.

And now some of the readers will still think: "so, what's going on today?". Sorry guys, if you only want to know what size the waves will be at your spot of interest, there's tons of websites that just give you that number. On this blog and in each single morning call, what I do is an analysis of the data available on the internet (using the GP's meteo websites list in the right column). Unfortunately, you have to read everything, otherwise you are going to miss something. And, if by the end of "significant buoy readings" section you're still not sure what's going on today in terms of waves, this blog is either not for you or you haven't stuck to it long enough to learn.

Current wind map shows:
- a high pressure that is going to move NNW of us and by doing so bring some not so welcome northerly winds
- a well oriented windswell fetch (on the rise)
- an out of season proper fetch SE of New Zealand. Unfortunately it's not gonna last long, but I would mark Tuesday/Wednesday next week on your calendar if you like south swells.

NAM3km map at noon shows another day of strong easterly trades. Should be the last one at this intensity, but things are not going to get much better, because the wind will turn more northerly.