That yesterday was going to be a one session day was clear from the dawn. Conditions deteriorated remarkably already between 7 and 8am and they kept doing that throughout all day. Last time I checked was 3pm, didn't even make it to the lookout.

No action shots, here's a SUP foil video that just came out with Laird and his buddies in Kauai.

LairdFoilDec from Joel Guy on Vimeo.

My progression in this sport stopped completely as soon as the waves got good. I have no interest in trying to learn this if I can surf good waves. To tell you the truth, some of the waves of the video above, seem a bit wasted to me. At the moment, my interest for the foil is only for riding shitty onshore small waves and eventually for downwinders in the future. If the waves are good, I'd rather surf. But I still believe this thing is attracting interest, so here's a lovely history pill from reader Brad Beck.

We first started riding foils on the Mississippi River back in the early 80’s. Back then the board was the size of a really large skateboard (just a flat wooden board) with a seat on it. The foil itself was about the size of a dolphin tail. You talk about a ride!!! It barely floated, you had to strap yourself into the seat,  and when the boat started pulling you, you had to lean forward into the water almost drowning to get it up. It took me an entire day to get up on it and then I was too wore out to ride far. Around here it was a fad that lasted about 5-8 years and I have not seen one being used in the last 20 years. They were called "air chairs". 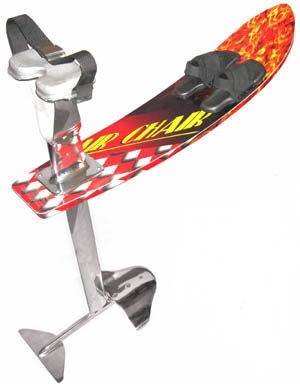 4am significant buoy readings
South shore
Nothing at the buoys, check the lahaina webcam.

New strong NNE pulse on the rise today. All the energy coming from a northerly direction at all the buoys and I didn't remove the readings of the small stuff (like I usually do), because I wanted to show you how many different period components there are at each buoy. The fetch was (still is) close to the islands and the shorter/weaker components didn't have the time to dissipate. As a result, the surf will be rough. Don't be surprised if you don't see the beach report, I might choose to go back to bed after this call.
The rise at the N buoy (the first to be hit by this strong NNE new pulse) was pretty steep and it will be just as steep in Maui. Surfline calls for 7f 11s from 21 at 8am and 8.8f 11s from 25 at 2pm.

Current wind map shows:
1) a new WNW fetch. More analysis on it below
2) a tiny leftover of the NW fetch of the last couple of days.
3) a long NNE fetch that unfortunately is too close to us (conditions will be rough)
4) a pretty strong fetch down in the Tasman Sea

Did you know you can measure distances and angles on Windity? Thanks to that, let's have a look at that WNW fetch n.1.
First, it's 2800 nm away. That is a lot.
Second, it extends from 296 degrees to 308. That's too west for Maui to really do something meaningful.
Third, look how short it is. Just to the west of it the winds are much more northerly and just to the east of it the winds are much more southerly. The result is that the amount of energy generated towards us will be relatively small.
Not a fetch to get excited about, I just wanted to show you what you can do with those tools.

NAM3km map at noon shows some light trades. Check the MC2km maps when they get updated to see what your chances are if you are one of the many desperate wind lovers. Or just wait, the wind will come back soon. I just saw a scary 17f 9s from 66 forecast for Dec 28 on Surfline.
DOWNWINDERS, I apologize if I always forget about you guys, but that is something to look forward to. 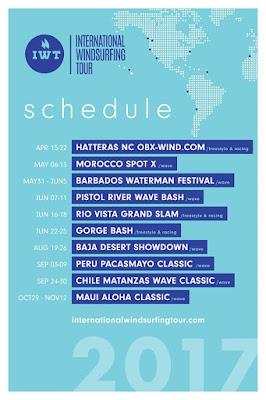 Email ThisBlogThis!Share to TwitterShare to FacebookShare to Pinterest
Labels: foiling

Leave it to Giampolo to dig up the OG schnizzle on the foil. And for the AWT becoming the IWT. Some of you may remember, most wont, when West Coast Windsurfing (widely regarded as the greatest windsurfing mag ever published) became Wind Tracks - a watered-down please-all of a mag that, in the end, suffered a mediocre death spiral into obscurity. I sincerely hope the IWT fairs better.