Only an early morning session for me yesterday and that's a sign that things have changed: the trades are back.

I took this photo in the afternoon at Hookipa without even getting out of the car. Wave size still solid, but plenty bumps on the face. Nice bottom turn by Casey Hauser, btw. 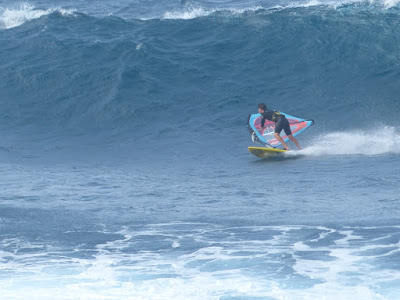 They're back and they're here to stay and actually get stronger right around the 25th, as the Windguru table below clearly shows. Gonna be a White (caps) Christmas here in Maui!
Which sounds a lot better than a blown out one, but that's what it is.

Before we get into the most important part of the morning call (the buoy readings), let's get a bit prepared with some delightful words of my favorite meteorology poet Pat Caldwell (link n. 9):

A hurricane-force system aimed 30-40 feet seas mostly west to east south of the western to central Aleutians 12/14-15. The portion aimed at Hawaii had lower seas. Angular spreading from the highest seas combined with the latter is giving the below average event locally 12/18-19.
This event arrived lower and later than predicted by Wave Watch III, ww3, on Sunday 12/18. It has caught up with ww3 expectations on Monday 12/19 from 320-340 degrees. This event is expected to drop off on Tuesday as a new event builds.

Another hurricane-force system formed just west of the dateline 12/16 with a slow eastward track to the ENE 12/17-19. Once again, seas of 30-40 feet of mostly west to east orientation stretched south of the western to central Aleutians. The bulge of highest seas was larger and the area was closer than the previous event. The portion aimed at Hawaii had mostly 20-25 feet seas and covered a long, wide fetch, which should make for a long-lived episode.

The jason altimeter estimated seas aimed at Hawaii at levels lower that predicted by ww3 late Sunday west of the dateline. With the uncertainties from this aspect and the angular spreading, stay tuned to the latest forecast updates as the swell trains roll under the NW Hawaii buoys Tuesday.
Extra-long wave periods from angular spreading of the highest bulge should build surf locally Tuesday morning from 320-340 degrees. The event should peak Tuesday evening.

5am significant buoy readings
South shore
Nothing at the buoys, check the webcams.

Do not get fixated on the weird directions. The buoys can show incorrect directions, specially when there's other swells and active wind insisting on them. It comes from the Kamchatka corner, that's good enough info until the swell gets bigger and the buoys will register its direction more precisely.

And let's not forget the almost 6f 9s from 70 degrees that, thanks to the much higher consistency, will still be responsible for a lot of the energy in the Maui waters.
Current wind map shows one more day (probably the last) of wave generation by the NW fetch responsible for today's new swell (which is consequently going to be long lasting) and a relatively weak windswell fetch.