Usually I'm out the door at first light, but yesterday the weather on the north shore was so bad that I only made it out of the house by noon. Just in time to catch one of the very few Hookipa sailable windows of the day though. Despite the strong wind, the waves were fun (the windswell had moments of semi-organized 10-11s period sets).

In the afternoon I had to work and part of my job is to continue to keep checking the conditions so that I can offer the best advices to my rental customers. I laugh inside when the poor unaware customers ask me if I know how the conditions will be for their stay... 'cause they have no idea of the amount of detailed information they're about to get! :)

That is a photo of the computer screen that shows the webcams of Pipeline on the left, Sunset Beach on the right and at Hookipa at the bottom around 5.30pm yesterday. Fore sure our Oahu neighbors had a better sunset... and better waves too!

Sunset beach is normally at the very bottom of the list of famous breaks that I would like to surf. Instead yesterday afternoon it was catching the forerunners of the new swell and it looked like perfect overhead fun lines. Watch the Vans contest online today and you'll maybe less perfect, but MUCH bigger Sunset beach. The one I wouldn't care to surf. 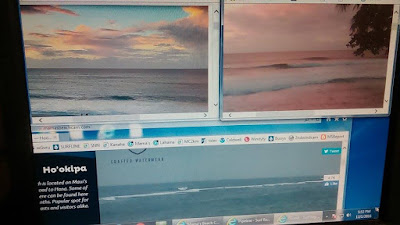 Here's a thing I figured out yesterday. This is the 3pm reading of Pauwela. The WNW swell was barely starting to show and it's always exciting (for my weird me, at least) to see any reading higher than 20s, so I got a kick out the that 25s one. But, why from 51 degrees?

Try to visualize the poor Pauwela buoy in the middle of the ocean being rocked 10 feet up and down every 10 seconds from waves coming from an ENE direction (that's the windswell). It's actually quite amazing that in that constant and very consistent oscillation and the roughness of the whole thing, the buoy was actually able to register such a much more subtle oscillation of .4 feet (less than 5 inches!) inconsistently happening every 25 seconds.

If you keep on visualizing the main 10f 9s oscillation, you will understand that the buoy has no chance to correctly detect the direction of underlying long period ground swell. I don't really know how the buoys do measure those things (and I'd love to investigate at one point), but it's pretty clear that in case of another much stronger swell in the water (like the windswell in this case), the buoy would get "overwhelmed" by it.

So the 25s energy was actually coming from somewhere around WNW (as we know), but because the buoy was heavily rocked up and down every 10 seconds along a ENE direction, that was the only direction it could detect. Can't describe this better with words, it's mental visualization thing.
Once the ground swell became big enough, the buoy started distinguish better the two swells and detecting both directions correctly. 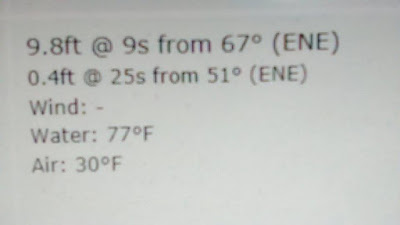 Before we get into the exciting call for the day, a huge THANK YOU to blog readers Knox and Mike that stopped by the shop to give me a donation for supporting the blog.

5am significant buoy readings
South shore
Barbers
1.6ft @ 13s from 174° (S)
That's the only indication of southerly energy I could find between Barbers and Lanai, because they are both getting quite "overwhelmed" by the WNW swell.

2.3ft @ 20s from 324° (NW)
Below is the graph of NW, Hanalei and Pauwela. I put arrows on the NW graph to show that the swell went from 2 to 8 feet in 12 hours. Not the fastest rise, but that's totally in line with the fact that the source was distant.
GP's rule of thumb for calculating the travel time from the NW buoy to Maui for NW swells is the following: 12h at 18s, 15h at 15s, 18s at 12s. It might not be exactly precise (preciseness seeking is nonsense in this matter), but it's symmetrical, easy to remember and it works... well, most times.

By applying that rule, I put two red arrows on the Pauwela graph to show where I think the two "equivalent" points of the graph should be. Even though it's not 8am yet, it's pretty clear that the reading at that time will be quite smaller than 8f. Where did all that energy go?
The answer is in the direction. Look at the Hanalei graph and readings. The swell gets there unblocked, doesn't have to refract upon anything and BUM, there you have it: 8f 18s!

Instead some of the energy that would have hit Pauwela if there weren't' any islands WNW of us, gets lost in refraction upon land points, reefs, or just shallower ocean depths. The longer the period, the more the energy of the swell travels deep under water, and the more it is then sensitive to how shallow the ocean gets when approaching a land. So even if the geometrical shadow line for Pauwela is around 305, a 20+ seconds swell will get blocked/refracted not necessarily by the emerged NE tips of Kauai, Oahu and Molokai, but by the shallower waters offshore of them. And that makes the shadow line of very long period ground swells completely different from what you can calculate by geometrically drawing a line between the emerged land points and the buoy.

Even knowing the bathymetry of the offshore waters, those shadow lines will be impossible to calculate exactly. But from a qualitative point of view, what we know is that they will be less west than the ones you get by considering only the emerged parts of the islands. For sake of clarity, I'm gonna force myself to throw some numbers out there. But they're completely made up, merely to help you guys to get rid of the doubts I believe you still have at this point.

Despite being one of the most crowded charts I've ever seen, the picture below might help visualize it better. I marked two bathymetry lines: a deeper one (B1 red color) and a made up shallower one (B2 blue color). I also drew their shadow lines for the Pauwela buoy: S1 in red and S2 in blue. The S3 in black is the shadow line of the emerged land and we know that to be 305 degrees.

I also drew a red triangle to indicate where the Pauwela buoy sits (red arrow with a P). There were already wave lines drew on it (and that was awfully convenient), so I just underlined them in red. Those are the wave lines of a swell that has a high enough period to feel the B1 bathymetry line.

In other words, the higher the period, the more it's like the upstream islands become bigger and of a completely different shape. But that doesn't mean that the long period swells will get blocked more than the short period ones! It's actually the other way around. Part of the confusion stems from inappropriately use the word "shadow line". It's more a "start of refraction line". Let me confuse you guys even more, with another example.

Let's take two extremely different swells, a 25s and a 10s one, both 5f high. Let's give them the same directions and analyze three different cases. To simplify things, imagine there was only Molokai NW of us. We know that the geometrical shadow line from Pauwela to the NE tip of Molokai is 305.

Case 1) let's say both swells come from a direction of 345. It's fair to say that none of them will be affected much by Molokai. Resulting wave size at Hookipa: something like triple overhead + versus head high.

Case 2) both swells come from 290 instead. None of the 10s energy will hit the buoy/Hookipa. The swell won't be able to wrap around Molokai and will die right there, breaking against its beautiful cliffs. The 25s one instead will be able to wrap around and hit the buoy with whatever energy and direction it will have after the refraction. Probably still overhead at Hookipa but very inconsistent.

Case 3) both swells come from 305. That's the tricky case. The 10s swell will hit the buoy/Hookipa much more unaffected by the land and its shallower waters. The 25s one will instead feel the ocean bottom well offshore Molokai and as a result it will definitely be more effected by it. But because long period waves will shoal upon the reef much more than short period ones, the resulting waves at Hookipa will still be much bigger and more powerful. Maybe double overhead + versus shoulder high.
I apologize for the lengthy explanation.
So how big is the swell going to be in Maui at 8am? I don't exactly know and I don't particularly care about putting my precious few remaining neurons into guessing that. There's incredibly complicated mathematical models (like the Wave Watch III)  that do that. What I care about is to understand why and how things happen and that's what I just shared with you guys.
Said this, the Surfline forecast at 8am calls for 4.1f 18s from 319 +-9. Why 319? Because that forecast already takes into consideration NOT ONLY the loss of energy (4f instead of 8f in this case!) due to the refraction upon the upstream islands and reefs, BUT ALSO the change in the direction after the refraction.
Is that going to be enough for the Honolua contest to be run today? I think it will. But we'll find out officially in the 7.30am morning show starting in.. 45 minutes! Sorry for the late call, but it took me some time to write all that explanation.

Current wind map shows:
- a strong but distant fetch in the Kamchatka corner
- the windswell fetch
- a weak south fetch. I've been circling some kind of out of season fetches down there in the last week or so, and that is keeping the south shore from going completely flat, but that is about to end soon. So enjoy another week of small southerly energy, if that is your type of waves, because they will go into hibernation soon.

PS. I put this post under the "wave period" and "refraction" labels for future references.
Posted by cammar at Friday, December 02, 2016