Sunrise and sunset sessions for me yesterday. This is Kai Lenny windsurfing Hookipa in the afternoon in a photo by Jimmie Hepp from this gallery. 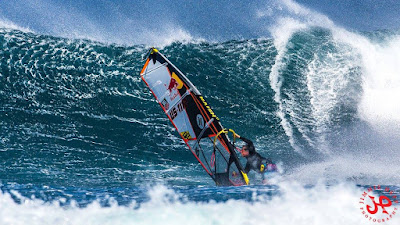 The wind got lighter at sunset and the waves looked allright. If you noticed that the afternoon windsurfing shots regularly show bigger waves than the sunset or morning ones, it's because when the trades are blowing (and they sure have been!) they pump up the windswell that adds on top of whatever ground swell is in the water. 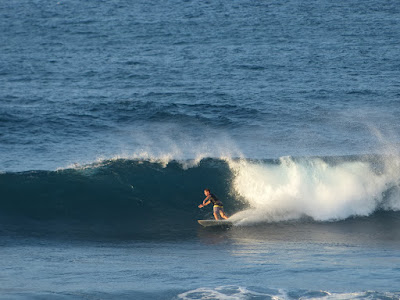 Here's a sentence from Pat Caldwell that shows the occasional unreliability of the buoys:
Nw Hawaii buoys 51101 and 51001 both show a rise in longer period swell of 14-17 seconds Tuesday morning. Given how close the buoys are located, the difference in wave energy is substantial with no clear explanation. Later Tuesday one can evaluate the pacioos/cdip Hanalei and Waimea buoys and perhaps figure out which one was more representative.
This small episode is building Tuesday and should drop Wednesday into Thursday to a seasonal minimum from within 315-350 degrees.

Honestly, I didn't even know that the 51001 buoy was back online, because the Surfline page that I check multiple times daily (link. n. 11) only shows the 51101. That is usually enough, because, as uncle Pat says, the two buoys are very close to each other, but I just sent them an email and asked them to add the other one. The more, the better. Or not?

And here's their very prompt reply:"Hi, I've notified our science team and we should be adding the buoy back over the next few days. Thanks for the heads up!"

That's the only significant reading from the south, check the webcams to see if that pleases you.

3.1ft @ 14s from 328° (NW)
2.9ft @ 11s from 335° (NNW)
2.7ft @ 8s from 70° (ENE)
3f for both the old (11s from 335) and new (14s from 328) swells will be the main dish on the table today. Should be head high at Hookipa, but check the beach report for the confirmation of that. The old swell will disappear during the day, the new one should stay relatively steady (maybe a slight drop at sunset) before dropping tomorrow which should be a relatively small day, considering the season. Pretty bad wind for surfing, unfortunately.
Current wind map shows:
1) a fetch in the Kamchatka corner that is producing a small NW swell. There's barely a sign of it on the Surfline forecast (couple of feet, 14s on Friday), but I believe it's a little underestimated. That'll be the last bit of energy from the NW for a while, since, as we will see in the next few days, the dominant direction of the swells is going to be NE for at least the first two weeks of January
2) a northerly fetch associated with the eastern ridge of the strong high pressure that is taking control of the middle of the North Pacific and that is about to block the generation of NW swells. The related northerly swell will hit on Friday
3) the windswell fetch
4) a fetch SE of New Zealand (related south swell predicted by Surfline at 1f 15s on Friday)

Lastly, here's the Windguru 10 days table that shows the wind going progressively more northerly. Soon the direction will become too north for the sailing on the north shore to be ideal. Desperate wind and kite surfers should be able to get their fix on the Kihei side though. Should get a tad colder too.