Double Hookipa session for me yesterday, both excellent thanks to the lack of wind, of course. As soon as a light tradish breeze strated to show up around 4pm, the conditions deteriorated immediately. This section was spared, but you can see the bump/texture out the back. I even had the dreadful vision of some white caps on the outside. Geez, I did not miss those! 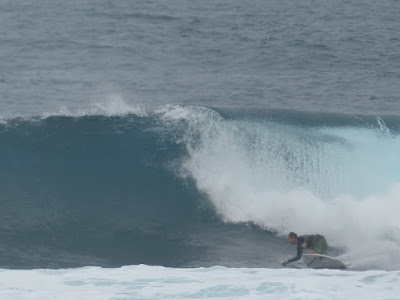 I just received this message/warning from a friend.
Hey GP, I Just had my two custom KT surf boards stolen from my truck in Paia municipal lot. A KT 6'4 & a 5'11 please spread the word. The police said they are having 5-6 breakins/car thefts per day between Paia and twin falls at the moment.


5am significant buoy readings
South shore
Nothing at the buoys, check the webcam if you're interested.

Notice the following:
- all the black lines (sum of all the energies in the water) went down compared to yesterday. That's because the Kona low moved away and the related northerly swell has declined.
- the NW buoy didn't record the first small very long period readings of it (I put a blue dotted line where they should have been). That teaches us that we can expect that again from that buoy, unless there's nothing else hitting it.
- the NW swell is pretty steady at the NW buoy, so we can expect it to be also locally all day today. It might just lose 1-2 seconds in the period.

Current wind map shows a NW fetch that has been producing waves for at least the last 4-5 days. The resulting swell will arrive Tuesday and last, you guessed it, 4-5 days. Windswell fetch and not well oriented southerly fetch barely deserved a circle.

NAM3km map at noon shows easterly trades, but conditions at dawn should be calm and clean instead.