Yesterday I surfed Hookipa three times and took these photos around 9am between sessions.

Tanner Hendrickson with Curren in mind. 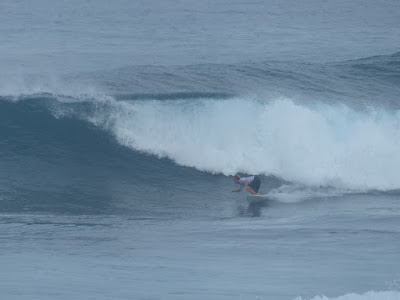 The occasional little barrel was on offer, but quite rarely. The medium period (12-13s) made the waves relatively gentle and that's why I didn't mind the size and had a blast. 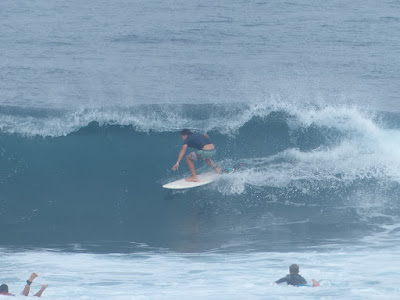 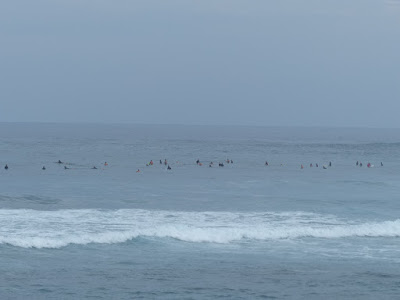 But not as crowded as Pipeline! 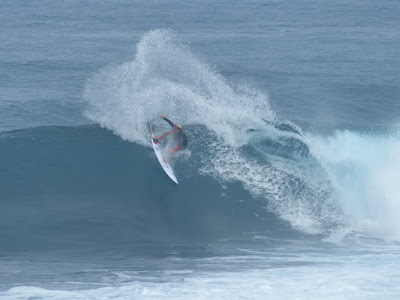 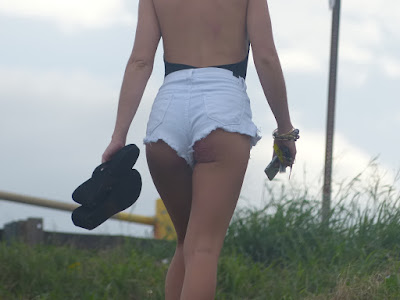 Braddah puts his SUP on the rail on a beautiful looking wave. As predicted, the size of the waves increased throughout the morning and there were some occasional double overhead bombs. The last one of my second session was like that. A left a Green Trees that took me all the way to the channel and on which I did four turns. I got out of the water on at the Pavillions' end and walked my way back to the car at The Point with a big smile on my face. 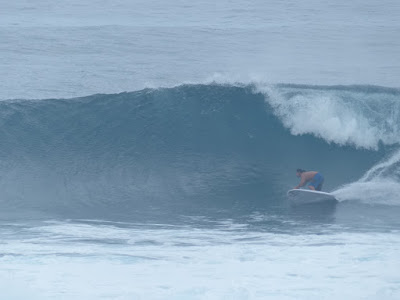 I confess I didn't even look at the Lahaina cam yesterday, but it definitely seems that there should something. That's what the buoys say, check the cam yourself and see if you like it.

Pretty confusing numbers at the buoys, let's see if we can decipher them.
First, that 11f at the NW buoy might easily be a glitch of either the buoy or the Surfline software that analyzes the raw buoy data and separates the energy of the different swells. As you can see from the graph below (NW to the left, Pauwela to the right), there's another swell in the water at the NW buoy that reads 2.4ft @ 10s from 49° (NE).

I didn't report that above, because it's a NE swell (probably that crooked fetch I pointed out couple of days ago) and, considering the position of the NW buoy, it will probably never get to Maui. That's the meaning of the word significant: I only report (copy and paste from link n.11) the buoy readings that are relevant for Maui.

The last few readings for the N (orange line that turns dark blue at the end) and the NE (light blue line) swells were around 9 and 6 feet respectively. Then, all of sudden, in the last reading the N swell jumps up to 11 and the NE one goes down to 2.4. If you've been looking at these buoys for a few years (like I have), that should immediately catch your eye as a improbable thing to happen.

Then notice how close the period of the two swells is: 11s versus 10s and that facilitates the possibility of a mistake. The message here is: don't blindly believe what the buoys say (that's why I called link n.11 "the Bible"). So that reading for the N swell is more likely around 9 feet. Still a solid number though!

At Pauwela, the easterly windswell is still hanging in there while the direction of the northerly swell is now 343 and the period went down to 11s, but still a nice almost 5f size. That translates into super fun playful head to head and a half waves (that's my guess, for that the beach report is always more accurate) and with the wind like in the NAM3km map at noon below, it's gonna be another cracking day of surfing on this beautiful rock.

Current wind map shows a brand new little low forming right north of us. It is not generating any waves, but it's keeping the trades at bay. The only thing I don't like about this map is the fact there's very little wave generation for us. Pretty much just the easterly windswell. The fetch down south is too blocked.

I like when a low pressure develops close to us and kills the trades bringing some winter weather. I don't mind the rain while surfing and looks like we're in for some more today and the whole week.
I might have to use the dryer for my overflowing laundry. With the exception of that couple of winters I lived in Haiku, that'll be the second time in 15 years. With the exception of Haiku, dryers should be illegal in Maui. Such an unnecessary and polluting waste of electric energy.