Couple of session for me yesterday: the morning one in conditions that I over scored from the cliff (a 1 was too high), the sunset one was in classic November 2016 conditions with 20 knots of wind... not in the gusts though, steady!

What a horrible month November has been from the surfing point of view. Only one week of no wind at the beginning of the it (when the Aloha Classic had to be put on hold) and then it was always blowing strong.
Some windsurfers obviously enjoyed that, this is yesterday's conditions at Hookipa. Photo by Jimmie Hepp from this gallery. 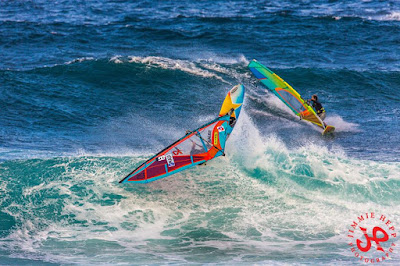 Before we get into what's on offer today, let's see how the start of December is going to look like.
The windguru table below makes me take a big sigh of relief. Today is the last day of strong trades, tomorrow lighter and sideoff, and then a lovely strip of days with variable winds that might finally pump up a bit the morning rating for the surfing conditions at Hookipa. I see the potential to finally reach the excellent range.

Don't forget it's a la Nina winter though. Below is the wind map forecasted (by the GFS model in the Windity graphical representation) for Dec 6. As you can see, it's really not a typical winter configuration at all. The north pacific is still completely dominated by two high pressures, we're just going to be temporarily lucky to be right in the middle of the transition between the two.
Look how high the low pressure will be forced to be and that is not conducive to the usual Hawaiian big winter surf. I don't care, as long as it's clean, I'll take any size surf and I expressed my excitement on the map as well.

Both Lanai and Barbers show the fading 11s energy of the previous small south swell. They also show the 15s energy of a new swell that arrived yesterday, but the size is marginal. Check the webcam before going.
North shore
Pauwela
7.4ft @ 9s from 68° (ENE)
No sign of tomorrow's NW swell at any of the buoys yet (even though the NW one tends not to show the small long period readings, I noticed). Despite that, the NOAA is calling for Oahu:" 7 to 10 feet this afternoon, then to 10 to 15 feet late tonight".
They're probably basing that more on the models output than on the buoy readings. I'm just going to say that in Maui there should be no sign at all of that swell all day today. That is confirmed by the Surfline Maui north shore forecast below. In other words, windswell is all we have on offer on the north shore today.

Here's my outlook on the girls' contest at Honolua. And by doing that, I'm going to spend a few more words on my favorite wave forecast page, since I noticed some of the readers were still kinda confused about it. If you want a longer, more detailed explanation, please read this post.

First, here's how to get to it: click link. n.15 on my blog, scroll down a tiny bit, then click on the "offshore swells" tab. If the graph doesn't show on your Internet Explorer (it doesn't on mine), try with Firefox or Chrome. If this page is not available on the surfline app, screw the app and bookmark the page on your phone.

Once you're on that page, if you put the mouse on top of any of the arrows, you'll see size, period and direction. For example, the 8am arrow on Friday gives: 4.1ft 18s from 319 +- 9. That's what the wave forecasting models they use (probably the ww3 plus whatever customization they put in it, if any) predicts to be in the OFFSHORE MAUI WATERS at that time of the day. I find it extremely reliable and often matching exactly what is then recorded by the Pauwela buoy.
Note: it's for Maui offshore waters. That means that it already takes into account all the direction and size changes due to eventual refraction upon the other islands.

The +- 9 degrees is the range of direction they think the swell is going to have. That means that most of the energy will come from 319 degrees, but there might be energy (read sets) from a range of directions that goes from 310 to 328. That will never be exactly precise, but it's a good indication of how wide the directional spectrum of a swell will be.
The 8am reading for Saturday morning is 6f 15s from 313 +- 10 degrees and that reflect the fact that the fetch didn't move east like they normally do, but it was forced a bit south by the block of the high pressure. I pointed that out in the previous 4 days calls in the "current wind map" section.

Now that we got this key information, that's when the local knowledge comes into place.
From this post, we know that 319 is an unblocked direction for Hookipa. How big are the waves going to be over there? 4f 18s from 319 can easily produce double overhead sets, in my opinion.

From the same post, we also know that the Molokai shadow line for Honolua is 335, so even the eventually more northerly sets coming from the 328 side of the directional spectrum will be blocked.
But it's not going to be flat though. Waves have the ability to refract around land points and the bigger the size and the longer the period of the swell, the better they do that. I talk about refraction in these two posts under the "refraction" label.

How big are the waves going to be at the Bay then? Well, I live on the north shore and don't know the Bay well at all, so I don't exactly know. But I'm gonna guess that they will be at least head high or more when the set arrives. The problem is that only the biggest and more northerly sets will manage to wrap around Molokai and so the frequency of arrivals will be low. Possibly even painfully low.

Friday and Saturday are the last two days of their waiting period. Are they going to wait there and check if the swells is big/consistent enough? What if it isn't? How quickly can they move the whole production thing to Pavillions?
If they want to be safe from the size of the waves point of view, they should take a decision today and move it to Hookipa for a Friday morning start.
From the quality of the waves and economical point of view (I imagine moving to another site to be very expensive) they should wait until Friday morning at the Bay (but then it might be too late to move).

** little update after having seen the morning show. They have a total of 16 heats left to run. That can be done in 8h, just one day. The best call will be to be at Honolua tomorrow morning to check the conditions and if it's a no go, they can still move the whole thing at Hookipa on Saturday. **

Current wind map shows:
- a NW fetch (this is the remnant of the one responsible for Friday's swell)
- the windswell fetch
- a weak south fetch