At the risk of sounding repetitive, I'm gonna call also yesterday another spectacular day of surfing on the north shore. At least it was for me, with two more sessions that I'm gonna remember for a while. Specially the second one that saw my new "record" of steepness for a successful drop on a right.

The reason why I always start the call with a short report of what I did the day before, is to show you guys that with the info contained in these calls and your local knowledge, you can score your favorite conditions almost every day. In other words, I'm trying to motivate you guys to get out there and search.

The Kona was fairly strong in the afternoon and some windsurfers tackled Kanaha, while up the coast at Lanes the only successful attempt seems to have been the one of Ross Williams, here in a photo by Jimmie Hepp taken from this gallery. 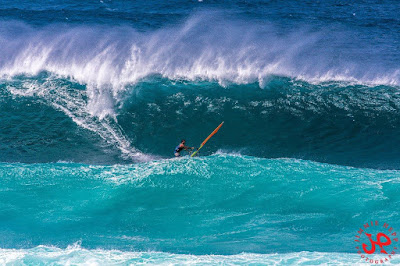 5am significant buoy readings
South shore
Nothing at the buoys and kona wind blowing, not a good day for the south shore.

Yesterday I posted the Surfline open ocean swell forecast highlighting the peak of the swell at 14f 12s at 8pm. This is the graph of the Pauwela buoy. The peak is exactly at 8pm, the size is just under 14f (probably 13) and the period is just a bit higher. Nonetheless, one more case in which this forecast was totally spot on. I keep hearing people saying "surfline is always off". That's because they check whatever specific spot forecast or the Regional Forecast Dashboard tab or whatever the app on their phone (which I don't even have) says. The Offshore Swell tab is very accurate instead: link 15 of GP's meteo websites list on the right.
Anyway, the NNW is on its slow and steady way down, but it's still gonna be fairly big and full of energy all day today. 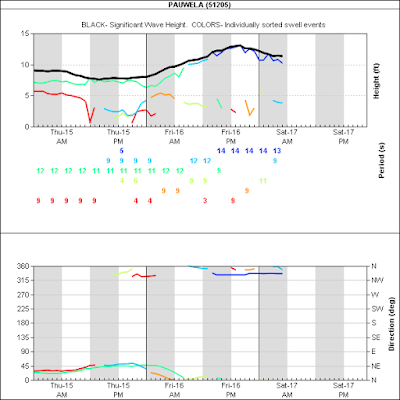 Current wind map shows a wide NW fetch that, together with the ones of the past three days, will keep a steady supply of energy from that direction. With the wind turning from a much more favorable direction, the Pipeline contest will finally resume and complete Sunday, Monday and Tuesday in increasingly good conditions. That's my call, at least. Perfect timing for me, since I just caught up with round 1. Kelly Slater might not be the world champion anymore, but he's still my favorite surfer to watch, John John included. Here's the waves of heat 10 in which he was able to deservedly get a couple of sixes for just a turn and a floater! The other guys did many more turns on their waves, but Kelly's moves were just a bit more radical. Quite a bit, actually. I was in line with the judges on that one. Uniqueness is not explicitly part of the criteria, but I like when they reward it. Put it like this: rides like Kai's and Caio's can be seen every day at Hookipa when the good guys are out. Unlike those couple of maneuvers like Kelly's.

That low north of the State has been a blessing with all that kona wind it generated (let alone the waves). Usually the storms follow the jet stream west to east and after the kona they bring the ugly northerly winds before everything settles down and goes back to the regular trades. This one instead, is going to move west and that means that after the Kona the wind will shift to the south, south east and then east. And if there's a direction that I like better than the Kona for the surfing on the north shore, it's the SE one. Thank you little low, I should actually call you a little love.

The Windguru table below illustrates that shift of the wind I just talked about. I don't mind the trades too much if they're easterly. I definitely mind them when they're as strong as they are predicted to get next Sunday/Monday, but that's more than a week ahead. I just wanted to give the "good news" to the many wind lovers that somehow still follow this blog, despite my evident preference for the stillness of the air. Thank you guys.

Lastly, a reminder that tonight there's the "Don't crack under pressure" movie at the MACC. I've seen the previous ones and the photography has always been outstanding. Here's the trailer, additional info on their facebook page and you can get your tickets here.