I chose not to surf yesterday (too windy on the north shore), but I have aggressive plans today.

It was one of those days in which windsurfing played the protagonist role at Hookipa. There's many of those in Maui (and that's the reason why I moved here 15 years ago), here's how the windswell looked like in this photo of Jimmie Hepp. Sailor Colin Baker. 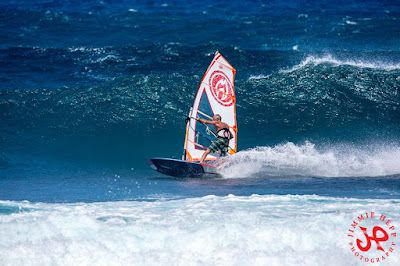 Buoy graphs show the quick rise of the new NNW swell. The biggest energy of this swell will miss us to the NE (I put a blue arrow on the wind map at the end of this post to indicate the path of it), but we're gonna get plenty angular spreading. This is how Pat Caldwell puts it:"A winter-caliber low pressure system deepened as it moved east from the dateline over the Aleutians 3/8-9. Ascat satellite showed a large area of severe gale to hurricane-force winds aimed mostly zonal, or west to east, at targets NE of Hawaii. This makes for larger error bars on the local surf height estimate. The system moved east of the Hawaii swell window by late Thursday. It should be a short-lived event locally."

In this case, the travel time rules from the NW buoy to Hawaii don't apply, since all the buoys will get hit kind of from the side. The initial readings (red arrows) are in fact much closer than usual. What counts in that the swell is still on the rise at 4am at all the buoys, I hope to hit the bay at dawn before it gets too big/crowded for me to handle. I would love to stay on the north shore, but even though a tiny bit more offshore every day, it's still too windy (iWindsurf reading 20 at Kanaha already).

I numbered the swells because I have a question for all my readers which I hope will have learned the answer if they followed this blog long enough: Which swell between n.1 and n.3 will generate bigger waves at Hookipa? Answer at the very end of this post, so you got time to think about all the factors that will influence it. 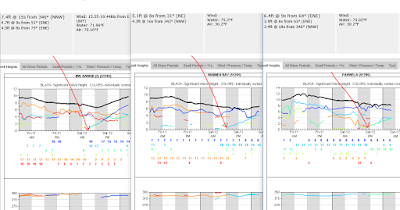 MC2km map at noon shows wind. Calm in Kihei because of the easterly direction (would be hauling instead with 20 degrees more north in the original direction).
It's gonna be a cracking day of windsurfing on the north shore (I'm even gonna put my board in the car!), since the wind is slowly turning more and more offshore. That does a few things:
- less chop on the face of the waves
- less clouds (and less squalls) to the stretch of coast downwind of Hookipa
- gustier than usual. 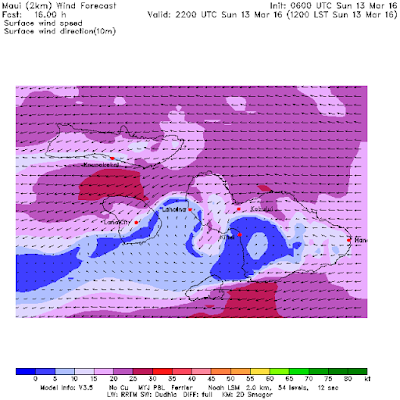 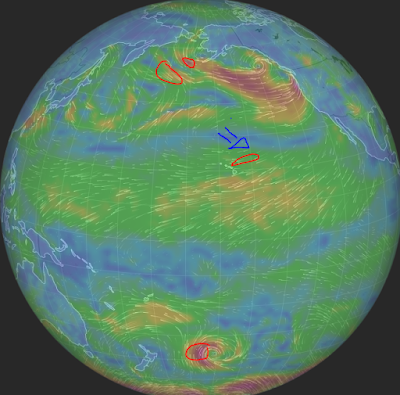 Answer to the trivia question above: swell n.3 for the following reasons:
- it's 18s vs 9s. That will make it grow much more when hitting the reef. Twice as much? No, more than that: the growth with the period is not linear, it's more like exponential, but I really don't like to set rules in this field. I'd rather base my guess on the experience built on the empirical observations.
- it comes from a direction that is perfectly perpendicular to Maui's north shore. N.1 comes from a direction that is pretty much parallel to  it.
The only factor in favor of swell n.1 is its biggest height, but as we just saw, that won't count enough.
Posted by cammar at Sunday, March 13, 2016