Sorry about the late call, nothing to report about yesterday on the north shore other than ugliness.
With a reading of 9f 7s I even stopped at Hookipa in the afternoon and looked at conditions that would have probably been defined epic in many places in Europe (the ones that don't get the long period Atlantic swells like Mediterrean and North sea), but I couldn't find the motivation to get in and seek those extremely rare rideable faces. No one was in the water either, we're spoiled over here. Specially this winter.

So the action photo is from yesterday morning on the south shore were I taught yet another successful lesson in ideal conditions. I film my students and then send them the clips/photos, so that they can check what they did. In this case for example, she needs to get on her feet with a wider stance. But they both got up and rode waves, which they didn't in their first lesson they took somewhere else! 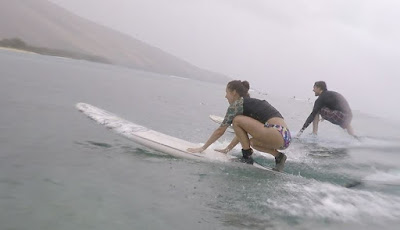 The local buoys all went up during the night, at 7am Pauwela reads an impressive 10.6ft @ 12s from 345° (NNW). The shape won't be there, but at least there's enough size for some spots to start working. Tomorrow should be even bigger since the longer period sets generated at the tail of the fetch will start arriving.
Did you guys notice how this swell has done the opposite of what normally happens? The shorter periods arrived before the longer ones. That's because the head of the fetch was right on top of us with not so strong wind, while the tail of it was far enough to require a couple of days of travel and had much stronger winds. You take that same fetch and move it in the usual NW corner and everything would have gone as usual: the slow shorter period ones would have been surpassed by the faster longer period ones and the latter would have arrived first on our shores. 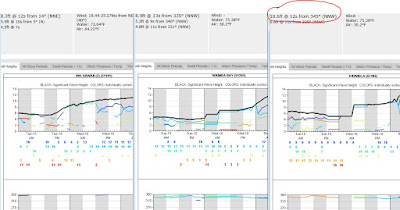 Wind map shows light too onshore for sailing wind on the north shore, but stronger areas in Kihei and West. 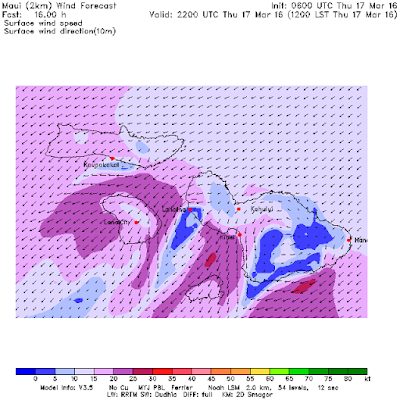 Wind map shows many fetches. The more westerly one is now extremely weak. The long period Sunday's swell is not going to be particularly long lasting. Couple of fetches north of us instead will keep northerly energy coming for quite a few days. The local northerly wind and windswell is just going to add chop and ruin the shape of the waves, so don't expect anything much cleaner than yesterday. 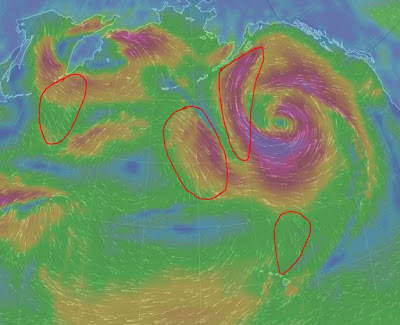 Couple of fetches down south, but nothing to get excited about, unless you're a surf instructor and want to plan a beginner lesson in a week. 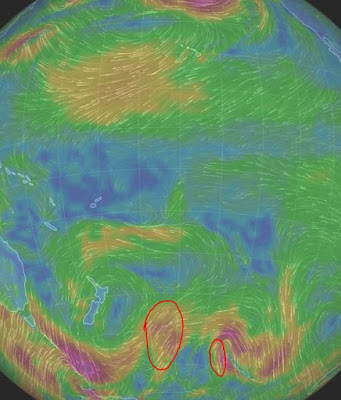