Ok, today I'm not gonna say that yesterday was another great day of surfing, because it wasn't. But I had two sessions nonetheless...

Early morning in Lahaina wasn't really worth the drive since it was windy almost everywhere (coldest session in Lahaina ever!), but I found a spot that had moments of glassiness. Unfortunately, you can still see the chop induced by the strong wind that was wrapping along the northwest coast. 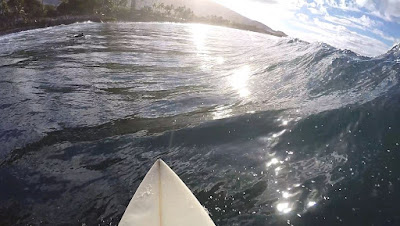 Later I also taught a lesson on that side and that was successful. 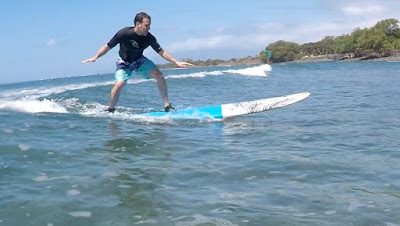 A nice Italian couple caught their first waves in conditions that were pretty much perfect. All around this spot, we were surrounded by blustery winds. I think we got a little lucky too. 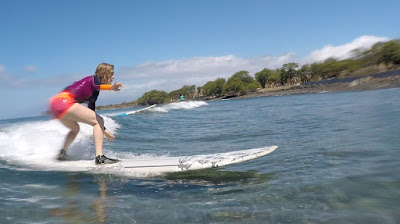 Second session was a power hour at Paia Bay and that, believe it or not, was more fun. Super consistent, always changing under your eyes and under your feet, that's the main challenge (and source of fun) over there.

Buoys' graphs won't add much info today (all kinda steady), so here's the 4am readings instead.
Pauwela reads 8.8ft @ 9s from 329° (NW). Which would be fun. Too bad the Hookipa iwindsurfing.com sensor (which is actually in Kuau) already reads 20mph from 63 degrees at 5am, so the big news is that this morning I'm not even gonna bother trying to surf. Yes, I'll take a morning off the water, can't even remember when was the last time, I hope my body survives the shock.

Where did the south swell go? I believe it's still there, but the buoy gets confused by all the NW energy caused by the blustery winds. Same seems to happen to the Barbers buoy that reads 3.9ft @ 13s from 292° (WNW), throwing even a bit of north in there. There is no other 13s energy other than the south swell around, it's got to the that.
Yep, sometimes buoy readings are not immediately clear.
All this can be easily confirmed if you check the webcams once the sun is out.

To partially confirm that, I feel like inserting an short abstract from Pat Caldwell's last forecast, since it also explains what I've been saying the last couple of days about the slow onset and offset of remotely generated swells:
"The NOAA southern Hawaii buoys and the pacioos/cdip nearshore buoys off southern Oahu and Lanai show the peak of the episode on 3/8. In the high wind generation zone, waves are generated with wave periods from 8-18 seconds, all piled together, otherwise known as seas. Longer waves travel faster, so the long wave period energy reaches remote destinations first. With a remote source, dispersion spreads the wave energy by wave period band over large swaths of ocean. The net result is remote events tend to change slowly and are long-lived. Given this information for the current episode, surf heights locally are likely to drop a notch by Thursday as the dominant wave period falls to near 14 seconds. It should continue a slow decline into Friday. "
MC2km map at noon shows a hell lot of wind, way too much to have clean faces to ride, so keep your expectations low wind sport wave riding enthusiasts. Jumpers and straight planers might have more fun. 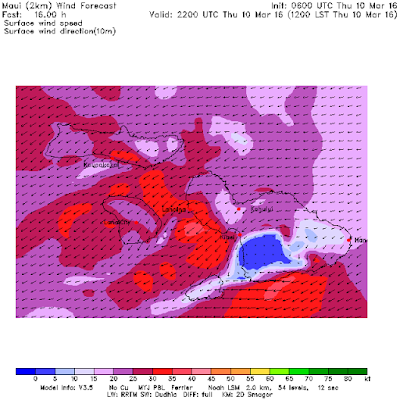 Wind map shows a good fetch up there (solid 11f 15s from around 340 confirmed on Sunday) and the strong wind area in which we are immersed in. 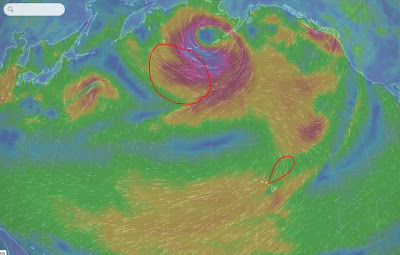 South Pacific wind map shows a nice fetch aiming straight at us just east of New Zealand. It's a bit compact, but it's worth to mark Thursday 17 on your calendar and check the buoys/webcam to see what we will actually get. Oh wait, you guys don't need to do that. You just check this blog! 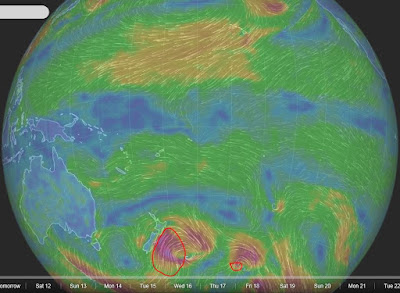