The north swell was a little smaller yesterday, but still plenty size.

This crazy wave was doing its thing and the body boarders were taking full advantage of it. How square is that barrel? 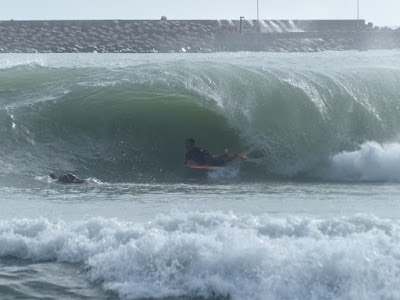 I surfed in the morning and took the afternoon off to rest my sore shoulder.
Windsurfing was still epic on the west side, but reports of bad traffic kept me at bay.
Judging from the size, this photo from Jimmie Hepp is probably from Thursday. Sailor Kai Katchadourian. 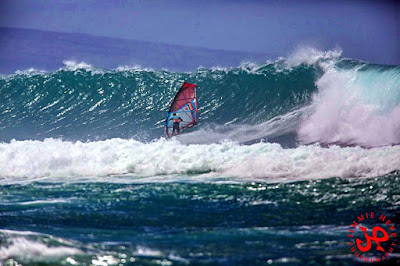 With the Pauwela (and Hanalei) buoy down, the three buoys I chose to include in the collage below are NW, N and Waimea. I underlined the direction of the new long period swell at the first two, since it's radically different and doesn't make much sense: 337 vs 229. I don't know what to make of the almost 40 degrees of difference, but looking at all the other buoys AND remembering the position of the fetch that generated the swell at the very beginning, I'm gonna trust the westerly direction better. Months ago, Pat Caldwell also said that the N buoy was adrift in a place west of the NW buoy and I don't know if it was put back in place or not, so there definitely is some confused information to deal with.

But I'll do my best and call for a westerly swell that will be refracted greatly before hitting Maui's north shore. As a matter of fact, despite the impressive 8.7ft @ 17s from 317° (NW) reading at 5am at Waimea, Surfline only forecasts 6f 15s at 2pm for Maui's north shore.

Let's not forget the remnants of the north swell! The Mokapu buoy in Oahu reads 9.1ft @ 13s from 2° (N), so today it will be an interesting mix of swells of completely different directions and periods. I usually don't like that, but if you can pick a spot that filters either one, the "problem" is not there anymore.

There we go, for your convenience, here's the wind map of March 15 that shows the fetch that generated the WNW we will see today. That is definitely way more west than 337. 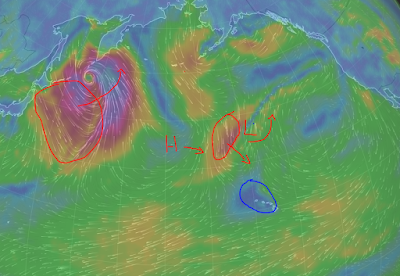 Wind map shows very little wave generation. Today is the first day of spring (according to our arbitrary definition of it) and that's definitely a sign of that. 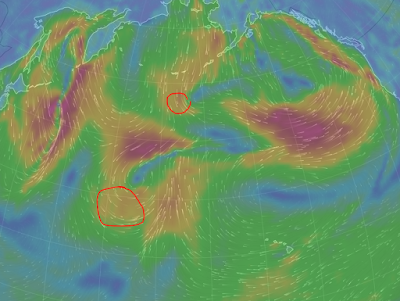 To counterbalance which, here's a sign of completely opposite trend instead. Today is the last regular trades day (kiters and windsurfers better take advantage of it) and after that there will be no wind for 8 days. That is not a sign of spring, that's for sure.

I actually dislike statements like:"winter is over" or using the man made calendar to announce seasonal changes. It's never black and white. You can have winter conditions in the middle of spring and sure I hope that will be the case this year, since I got 2.5 months of missed epic winter action to catch up with.

I remember massive Jaws swells in March and April and a whole month of May (something like 7-8 years ago) without a single windy day and with beautiful glassy waves. Nature doesn't like to be put in a box (Pat Caldwell). 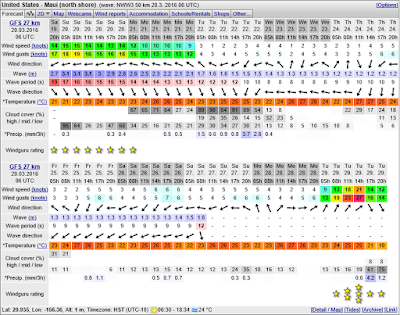 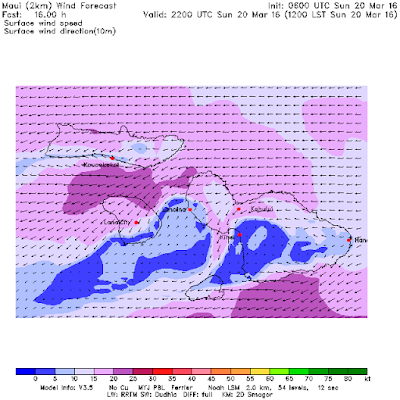