Double surf session, a glorious Napoli game and a deightful work shift made for a pretty good day yesterday.

Hookipa was challenging in the morning with no wind, I imagine it was even more challenging later with the wind that picked up enough for windsurfing to happen. Amazing what the Haleakala does to the wind in Maui when the sun shines.
The photo is by Jimmie Hepp and I wonder if that was a wave from the old swell or the new one, it's hard to tell for me from one shot only. At dawn it was only the old one. 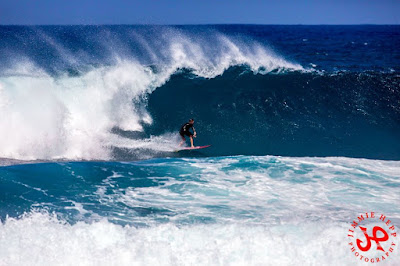 The three buoys graph below shows number that differ significantly between each others. The swell has gone up steadily at the NW buoy with a slight oscillation in the direction (blue line of the lower graph), Waimea has followed pretty closely since it doesn't get blocked much from that direction, Pauwela instead is "suffering" because of the refraction.
At 4am in fact, it only reads:
3.9ft @ 17s from 320° (NW)

Shadowing or not, the Pauwela buoy readings are pretty much in line with the Surfline forecast which gives the peak of this swell for this afternoon. I feel like spending a couple of words on the way to read the forecast on that website. First of all, let me tell you straight that I strongly recommend a subscription to it. Its long term forecast gives you decently reliable outlook of swells for the coming two weeks.

Even though you could try to do your own swell forecast by looking at Windity, it's always nice to know what the "official" models think about it. I use it heavily in Indo when planning internal trips.

But PLEASE use the offshore swells tab below if you want to do the right thing. Its graph looks exactly the way the swell will eventually look when it hits the buoy and it shows you beautifully the fact that there's multiple swells in the water at each single time. You can hover with the mouse on the arrows of the different swells and it tells you size and direction. For example, the 2pm forecast for today's swell, is 8.2f 15s from 316 and that is AFTER the refraction. It's what they think Maui's north shore will get. Tomorrow we'll look at the Pauwela buoy's graph and we'll know how close they were. 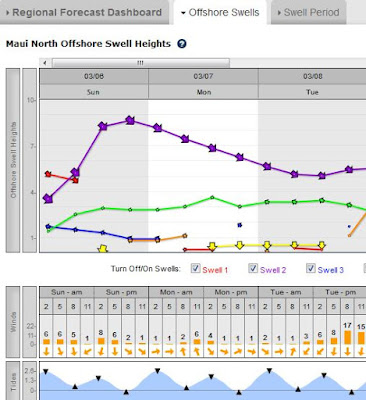 Most people I know instead uses the Regional Forecast Dashboard which, IMO, is absolutely useless.
According to it, in fact, the peak of this swell will bring 11 to 16 feet faces to Maui's north shore... nice! But where?? We all know very well that the size of the face of the breaking waves will be extremely different at Jaws, Hookipa or Kanaha in the same swell (thank god for that!), so that information has no value. But it does make for glamorous shares on social media when there's a giant swell and the forecast is up to 71 feet faces, I admit. I also admit I feel a sense of disgust when I see those graphs shared.
Stick to the open ocean swell and in two weeks you'll learn what that size and period from that direction does to your own spot. 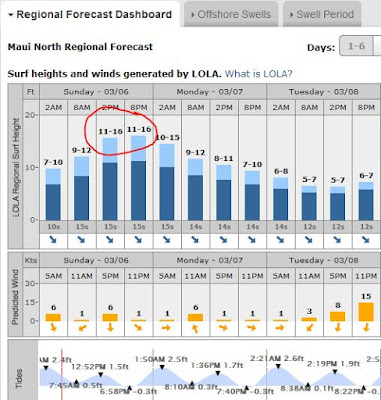 Wind map shows a NW fetch on the right flank of the high pressure that will take control of the north pacific soon. We are going to be immersed in that exact fetch starting Wednesday and that will bring havoc in the otherwise beautiful conditions we're gonna have till then. Enjoy till it lasts. 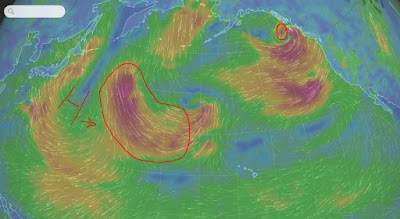 Bit of a fetch down south, it seems to me they always happen in the weekend. 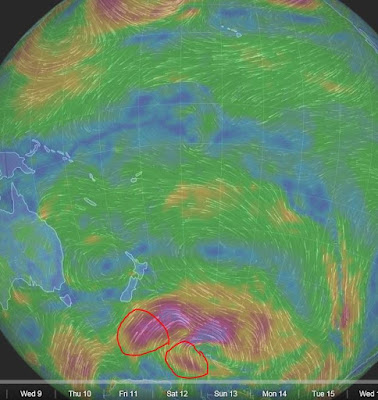 MC2km map at 7am below shows beautiful light offshore conditions. 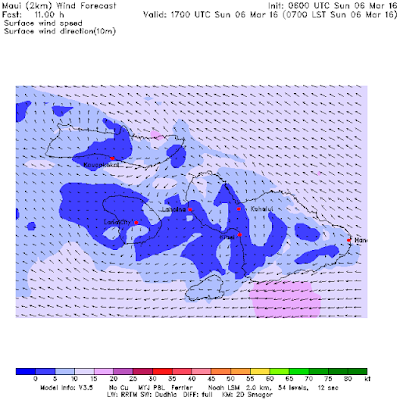 The noon map shows the most of the wind of the day. 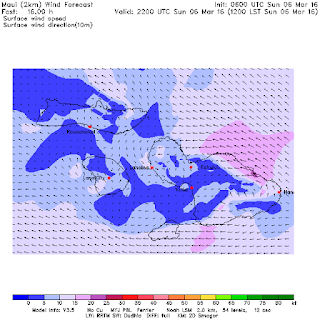 Email ThisBlogThis!Share to TwitterShare to FacebookShare to Pinterest
Labels: how to read the surfline forecast