Here's a shot from my early morning session. I'm starting to go for close out barrels, despite the fact that they scare the hell out of me. The wipeout after this wasn't bad, so I guess it can be considered a confidence builder. 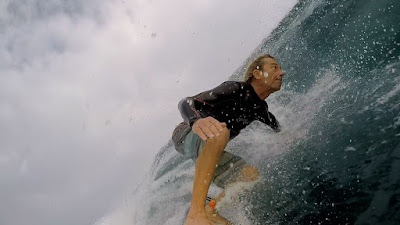 Later in the morning and before my afternoon work shift, I attended a Starboard presentation of their SUP line in Sprecksville. During the race boards part, I managed to sneak out, grab one of the many boards from the lawn and paddle out to the reef to give it a try.
Just before the waves, Kai Lenny on his very redbulled jet ski showed up and offered me a ride to the outside. Hanging on the sled while going over the breakers (solid head high) was quite a thrill.
Jet skis scare me. I'm not used to them and everything about them is against my ideal of enjoying the ocean in a natural way. But I love them for their safety aspects, of course.
Not sure I can mention the project Kai was working on, so I'll keep it to myself. 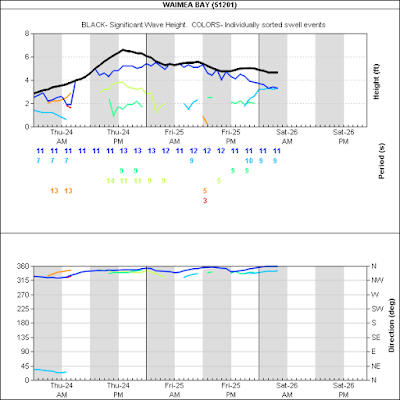 Yesterday I noticed but I forgot to mention the big rain that hit us in the afternoon. I'm just never focused on the rain, since it doesn't change the waves. If anything, it makes them more uncrowded.
Anyway, that big disturbance is moving away to the east and today should be much drier. 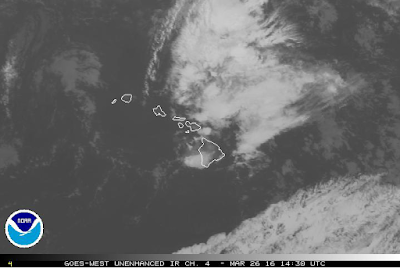 Wind map shows a strong NW fetch and a weak south one just to keep beginner waves rolling on the south shore. 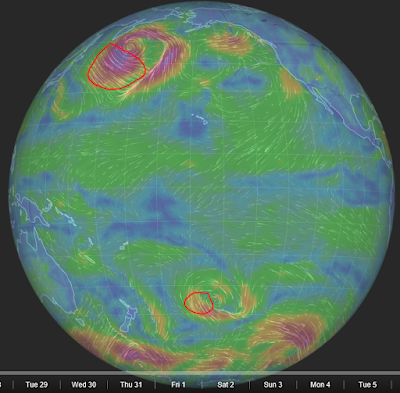 The low associated with the NW fetch is bombing down to 956 mbar and its associated front will move towards Hawaii and reach us Monday. The fetch of strong winds will follow behind and keep building the same seas that it is building already now. This situation is called captured fetch and is one of the many factor that contributes to increasing the size of a swell.
Others are:
- intensity of the wind (this particular fetch will lose a bit of that in the next few days)
- size of the fetch (this one is fairly wide and long, so the swell should be consistent and long lasting)
- proximity.

As for the last point, this one should get very close to us, so the waves are going to be in the extra large category. A bit too close actualy, since after the front will pass, right on the biggest day (Wednesday), the wind might come from NW direction and ruin the waves a bit. But at that size, it probably won't matter much. 14f 16s forecasted by Surfline pretty much all day.

Starting Monday afternoon (just before the arrival of the front) instead the wind should start blowing Kona and Tuesday afternoon has potential for epic windsurfing conditions at Lanes. Many pro's are in town for the brands photoshoots, they are going to be on it for sure, also because the trades won't be back for a whole other week.

Depending on the size of the waves on Tuesday afternoon, there might also be a rare opportunity of sailing Jaws with the Kona. I'm aware of only one guy who did so in the past (Robby Seeger), it would be nice to see someone else taking up the challenge. Too early to plan it, I just wanted to put a flee in the someone's ear...
Beautiful no wind area for Hawaii today, surfing should be good again. 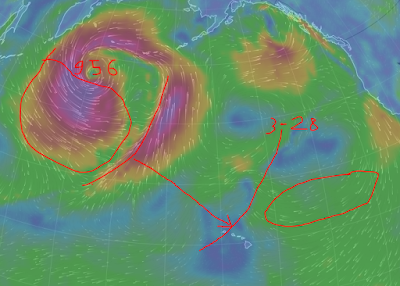