All went as predicted yesterday. The morning was glassy and the afternoon was onshore with the swell that went down enough to make Hookipa populated again after a few days of too big/disorganized conditions.

Photographer Jimmie Hepp was there to immortalize the action and this is Kai Barger with that front food pad that I need to investigate on. 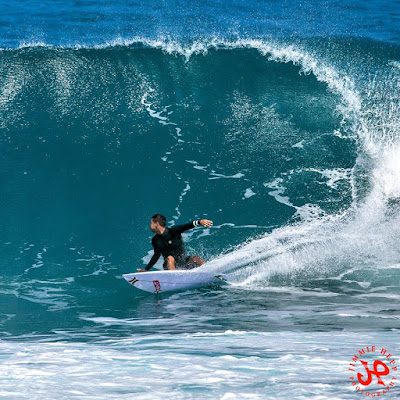 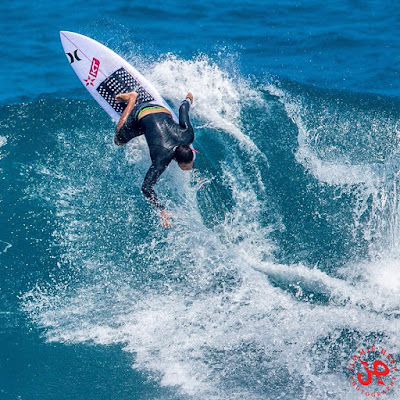 Lots to talk about the buoys today.
First let's notice how the decrease of yesterday's swell went exactly as predicted (blue circles on NW and Pauwela). I was in the water right at that time and it was clearly visible.

Today there's a new WNW swell on the rise. I circled in red the rise at the NW buoy. It's a little trickier to predict the time of the equivalent rise locally, because the NW buoy didn't register any 20s periods and the Pauwela buoy hasn't gone down to 18s yet, so it's like comparing apples and oranges.

Well, maybe not-ripe oranges and ripe oranges would be a better example, since those 18s sets at the NW buoy might as well have become 20s by the time they reached us.
According to Pat Caldwell in fact, the waves do increase their period (decreasing their size at the same time) while they travel, but I don't know how quickly they do that.
So I did try to draw a dotted red line on the Pauwela graph to indicate a rise in the afternoon, but I did that mostly based on the Surfline forecast than on the NW buoy readings.
Mind that this swell will be much bigger tomorrow (9f 15s at the 2pm peak according to Surfline), but it will start showing this afternoon.

Notice also the westerly direction at the NW buoy. If you want to see why, you have to scroll down all the way to March 1st and check the wind maps (the one where I circle the fetches). I did so and couldn't help being amazed by the quality of the surf we had in this first few days of March. And then you look at the distant fetches and you realize that while we were surfing epic waves, the Pacific Ocean was already stirring its waters way far from us (offshore Japan) to provide us with more waves 4 days later. Got to love the way this game works.

Anyway, another characteristic of remotely generated swells (like this one, at least the start)  is the slow rise.
That happens because the faster (longer period) waves have more time to separate themselves from the slower ones and so the time between the arrival of the different periods' energy is more dilated.
South swells are an even better example of that, since they travel an average of 7 days.

1ft @ 20s from 319° (NW)
and if you made it through all the stuff I wrote above, you should have figured that, at least for the morning, it would be better to focus on the leftovers of the old swell rather then the forerunners of the new one. The afternoon would provide a more interesting transition between the two.
I love Hookipa at that size and period, so I'll most likely be there at dawn. Expect the usual photo report later. I'll try to do one very early and one around 9ish before going to work.

I also want to celebrate the return of the Lanai buoy by posting its 4am readings:

If you're new to this blog and you are interested in this topic of shadowing and refracting from the upstream islands, I recommend to read this post that is labeled "NW buoy to Maui travel time and shadowing angles" for easy access in the labels section.

A  few more things you need to know about westerly swells at Hookipa:
- they are less consistent than unrefracted 305+ swells
- generally, the lefts will be better, the rights will be worse (the opposite happens for northerly swells)
- depending on the size, the channel between The Point and Lanes creates a bad rip current that goes back towards The Point and can create a lot of chop. Trade winds will accentuate that bad chop, since they come from the opposite direction.

Wow, I didn't really mean it, but this came out like a bit of a treatise on westerly swells at Hookipa. Hopefully also a treat for someone.

Wind map shows a WNW fetch that is aiming more at the Marshalls than at us, but we'll still get some westerly waves. I'm not worried about that, I'm worried about the high pressure that will come behind it. 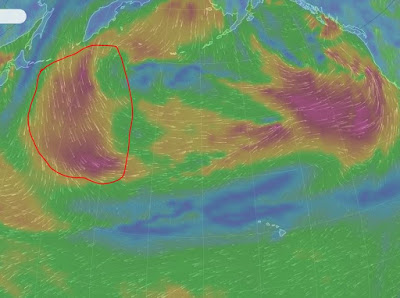 I'm doing this call pretty early today, not a chance for the Maui County 2km worker to be at work and update the maps yet, here's the Windity prediction for 8am that shows light sideon winds. That should be the case for the whole day. 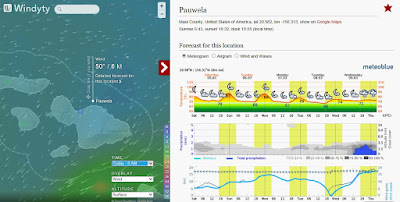 Well, quite on time today, the County worker updated the maps at 6am, and I'm still home (can't surf in the dark), so here's the 2pm map that shows light trades (5-10 knots). 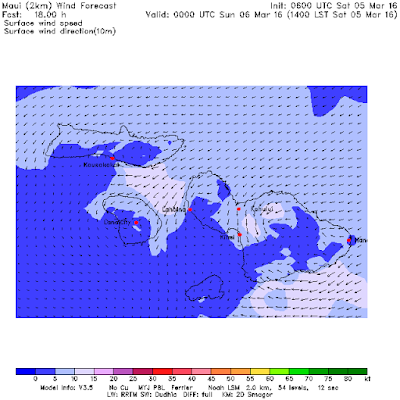