And yes, also yesterday was another great day of surfing. And not only.

This is the spot I surfed for three hours in the morning. It was much cleaner than that, since the swell went up in the afternoon and the spot got very slabby and a little out of control. The photo was taken at 6.20pm and that looks like Bones, but I'm not sure. 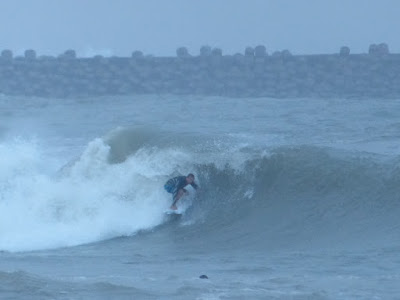 I was done by 9.45 (I would have kept surfing, seen the epic conditions, but I just couldn't paddle anymore) and despite the fact I had to work at 2, I drove one hour to go sail in the spot pictured below. I got rejected twice, had a long swim, but managed to catch two mast high waves that looked like the one below and that made it totally worth it. Photo by Jimmie Hepp, sailor Kevin Pritchard.
Three hours of epic surfing, one of epic windsurfing (told you I love north swells!), four hours of work. Not a bad lifestyle. 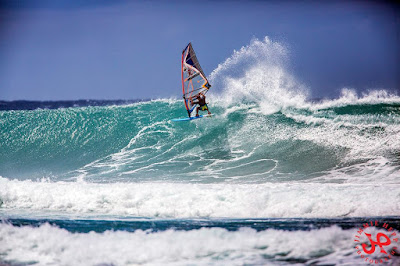 The really bad news is that the north swell took out the Pauwela buoy. Not available this morning, let's hope it's a temporary thing or at least a quick fix. Tell me what to do, I'll sail out there and fix it.

The graph below is of the N buoy and it shows that there the swell peaked in the morning. Whatever time it takes to get here, it must have peaked already in Maui too and so today it will still be big, but IMO smaller than yesterday at sunset and with a very slow down trend. That's good, because yesterday evening was a bit out of control. 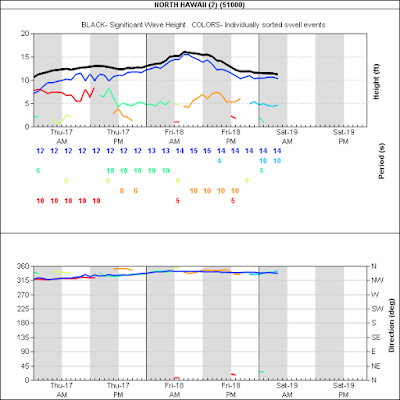 So this morning we'll go surfing without knowing exactly what's in the water. Like the good old days. Which, in this particular case, I don't miss at all.
Without the buoys, the fetch analysis becomes even more important: you want to try to remember how the fetch looked like and what it did in order to guess what the swell is going to do.
Or just check the Surfline forecast and they'll do that for you.

Here it is, for your convenience. The 8am forecast calls for 10f 14s from 353, going down a couple of feet during the day (red graph). Then the north swell will have another pulse tomorrow (for some reason the software chose to change color into yellow) and that's when the long period one (green color peaking at 6f 16s from 317) will add its energy on top.
The result will be a dangerous combination and since the wind will be good on Sunday for the north shore wind/kiters, I predict a very busy day for the lifeguards at Kanaha.
Note that after Monday, all swells will be very small, but the wind will be very light and small and clean is a combination that I like very much. I like any combination really, as long as it's not flat. 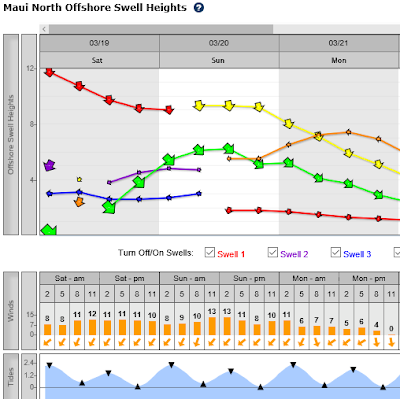 Talking about the wind, here's the MC2km map at noon. That still looks a little too onshore IMO for wind stuff on the north shore, but I'm sure someone will try and prove me wrong. Careful if you do, the waves will be still messy and dangerous. 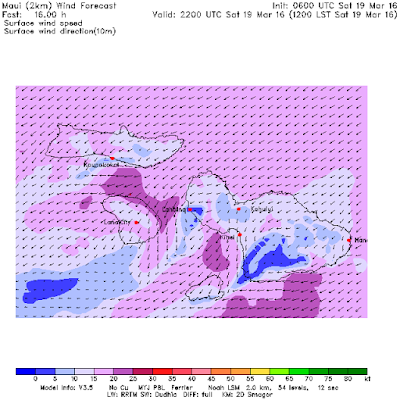 To the NNW of us, the wind map shows the remnants of the fetch that made this long lasting north swell. It also shows an interesting sneaky little WNW one. Related swell will be very westerly and might go under the radar. Not this radar though. 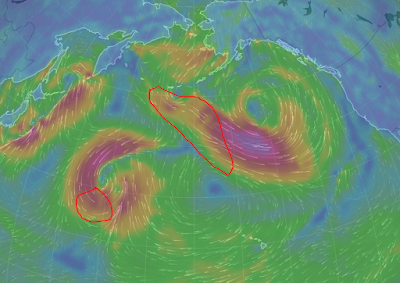