The harbor was fun yesterday morning as was a memorable power hour with a friend at Paia Bay in the afternoon. 16 to 14 for him was the score and that's one for the books.

But someone else has ridden so many waves in his young life already, that he needs a little more size to challenge himself. I'm speaking about Kai Lenny that went to Jaws for probably the 20th time this year.
I used to explaining to the visiting customers of the shop that wanted to see Jaws, that it only breaks about 5-6 times a year. Unless it's 2016, I should start adding.
Photo by John Patao. 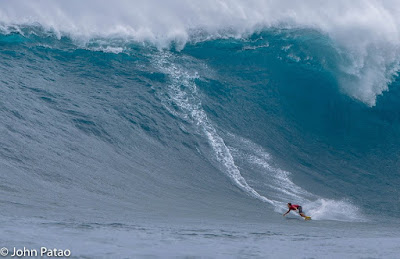 Here's the link to a video that documents yesterday's session. A bit of a raw edit (it was available already mid day yesterday!), but it shows:
- how you launch from the rocks
- how incredibly comfortable Kai is with his lines on a strapped tow board. He must have had a blast yesterday.
- how to get back in onto the rocks. The surfer that does that at the very end is Roque Calderon and he timed it perfectly, but you can see how tricky the run on those big boulders is and the high potential for disaster. I think I would break both my skinny legs.

The three buoys' graphics below show that yesterday swell's peaked during the night between Tuesday and Wednesday, but stayed quite elevated throughout the day. NW buoy reads 12.2ft @ 15s at 6am, so it's not going down all that much today either.
Pauwela reads:
9.6ft @ 15s from 325° (NW)

5.0ft @ 13s from 330° (NW)
3.5ft @ 9s from 344° (NNW)
3.1ft @ 10s from 339° (NNW)
and you probably know by now that all those different periods are never a good thing.
Multiple periods still better than no periods (flat), so no complaining here. Just look for a place that might filter some periods or some directions, since some of them are more northerly than others.

No sign of south swells at the Barbers or Lanai buoys, since they are reading the wrap from the NW swell, but Pat Caldwell did mention those fetches I highlighted last week. He even put a 1f 14s from SSW in his table for today. Check the Lahaina webcam if you feel like riding knee high clean peelers on that side (perfect for teaching beginners).
The number he put for Monday is 2f 20s which is very nice, and hopefully we'll see something like 3f 17s for Tuesday when he updates his table on Friday afternoon.

MC2km maps show very little wind in the morning while the noon map below shows the start of a light disturbing onshore flow. My personal policy is not to trust this light wind maps much and imagine that the onshores will pick up earlier than that. Definitely no sailing/kiting. 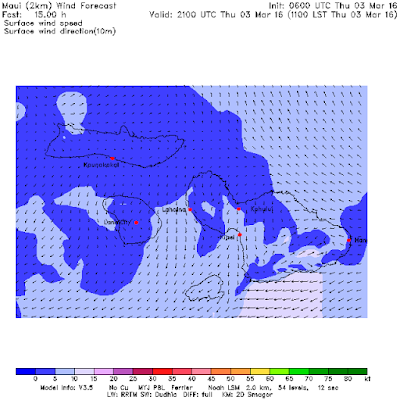 Good wind map today with a big NW fetch, the islands immersed in a light wind zone and another tiny N fetch that I forgot to circle, but you guys should be able to spot it. 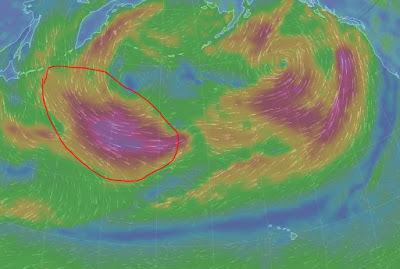 South pacific still maybe generating some waves for us, but not much. 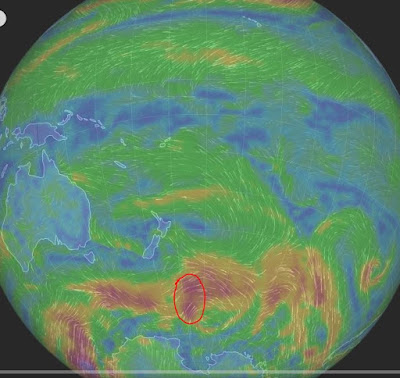