Another great day of surfing.

The harbor was pretty much the only choice in the morning (and it was fun), but in the afternoon the swell went down enough to open up more possibilities. I ended up surfing a new spot and that always adds an extra bonus to the enjoyment of the experience. Specially because in this case the spot was a bit intimidating and both my buddy and I never surfed it and there was nobody out, so we had to figure it out by ourselves. We did pretty good and had some good ones.

But you guys probably couldn't care less about that, so here is a stunning photo taken at Jaws last Wednesday by John Patao. 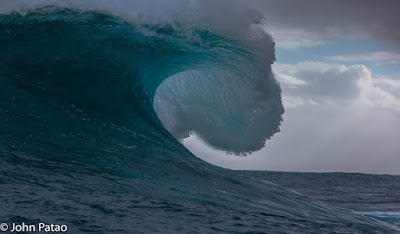 Same place, same day, I'm gonna steal also the caption that Erik Aeder (who is currently having an exhibition at Lumeria) used when he posted this photo: "Kai Lenny pretending he is at Whistler carving some fresh powder." 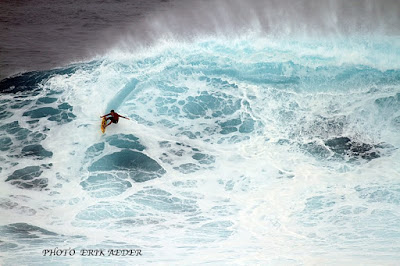 Yesterday brought me one delightful activity after the other. Just before lunch time, I stopped by the Quatro shop and had the chance to put my hands on a board that shaper Keith Teboul is shaping me.
There's so many good shapers on this islands that I find it hard to stick to only one, even though there's advantages in that too. A little bit like women, really. 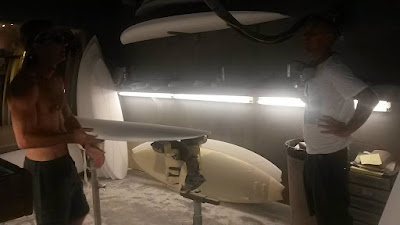 3.3ft @ 9s from 350° (N)
and that's a size that for me is borderline surfable at Hookipa (on a step-up). It's very important in these cases to know what the swell is going to do in the next few hours. That's when the other bouys graphs (and the surfline forecast) help.

On the NW graph I circled in red a little bump and in blue the drop of size right after it. I did the same on the Pauwela one to indicate that that should also happen locally. But Waimea is still going strong at 11f 13s, so that might happen only mid morning. The next readings (link n.11 is on the home screen of my phone) will be key in my decision, which is probably gonna be the toughest one I'm gonna take all day. I like my life to be simple.

Wind map shows an elongated fetch that takes most of the north pacific and a tiny N one. The pressure configuration is still very much wintery, but that is about to change starting Wednesday next week, when a massive high pressure will replace all that. That's when I plan to give my surfing muscles a bit of a break. I'm surfing 4 hours a day since quite a while and my shoulders will appreciate that. 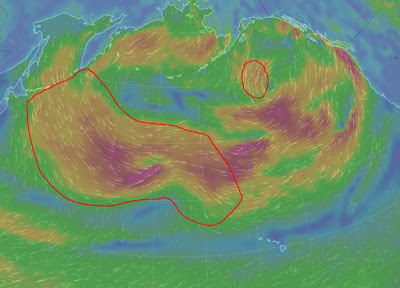 MC2km maps show light offshores to no wind until 11am when onshores will pick up. 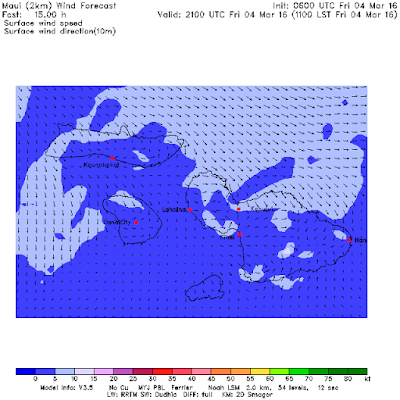