February has gone with a delightful day of great surfing conditions. If January was a 10 (what else could it be?), I give it a 8.5.

Yesterday the wind didn't do what MC2km predicted (come on you guys, NO website is always correct... it's weather, not math!) and conditions stayed good all day. At sunrise and sunset though they were well into the excellent range.

This is a gopro shot that I took on one of the many waves I caught at Hookipa. Size is head and a half and quality is quite self explanatory. 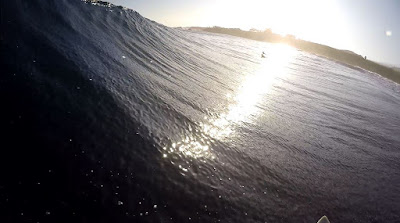 After the session I took some shots. That's how it looked from the beach around 9. 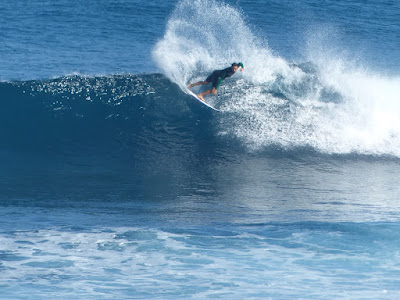 My friend Eric can still put it on the rail, despite the fact that he can't move his legs. Legend. 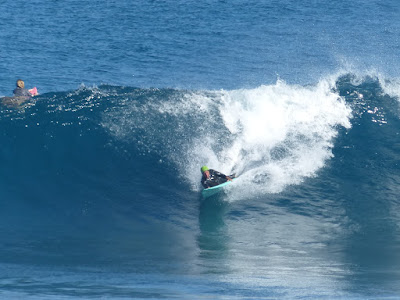 Here's a clip of a wave. The surfing is what it is, but the wave is beautiful. Those lips were calling for destruction. Next time.


New large swell on the rise, let's have a look at the buoys. The peak at the NW buoy seems to have happened around 9pm yesterday. 15s means 15h travel time, so we should expect a similar peak in Maui around noon. Mind that this is just a first pulse, tomorrow is going to be even bigger, so don't expect the waves to go down at all after this first peak. More like staying steady and then picking up again during the night.
The direction blue line at the NW buoy seems to be just under the true NW (315), so places like Kanaha should see a little less size/consistency than Hookipa.

3.3ft @ 9s from 340° (NNW)
1.8ft @ 8s from 360° (N)
That's already too much for me at Hookipa (specially on a rising swell), so probably no photo update today (at least not from there), since I'll be driving somewhere else in the dark.
Waimea already reads 11f 14s, and even though Maui might not quite match Oahu's readings, it's still going to rise all the way to noon, as we said.

Wind map shows the big and close fetch that generated the swell that is going to hit today now aiming mostly at central America. We'll still get some leftovers from the very back of it.
More to the west a new one popped out off Japan. In between them, a high pressure that will bring onshore winds for a couple of days, but then leave way again to cleaner conditions.
March is one of my least favorite months, because often it shows the signs of the changing season. That will happen also this year around the 10th with a big high pressure taking over the north pacific and bringing very windy conditions. Enjoy the glass until it lasts. 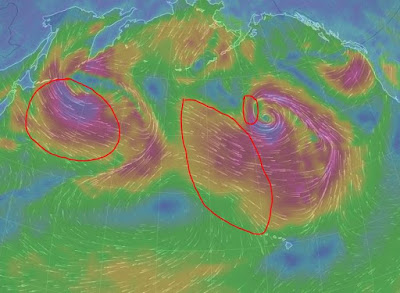 Down south another good day of wave generation for us. 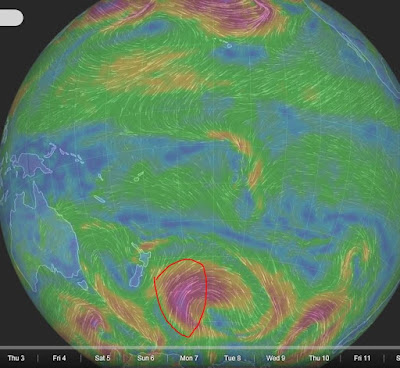 And now the frustrating part of the morning call. I do this at a time in the morning when the MC2km maps are not updated yet.
Since the update time is kind of random, I envision a county worker that lazily arrives in his office, pours himself a coffee, checks emails and does other things and then finally decides to push the update button...
Whatever the update mechanism is, the fact is that I'm left without reliable data and I should just totally avoid talking about the wind, just like I do with the rain for example. But the wind is just as important as the waves for the quality of the surfing conditions, so here I am again trying to decipher what is available.

Windity (brilliant graphical representation of the output of the GFS model) already shows the onshores in this map at 11am. 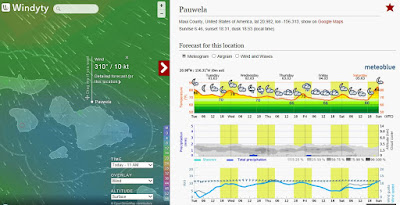 Here's two different models instead that on the windguru page both predict the switch from Kona winds (which if that strength is confirmed might even be sailable by some port tack specialists, but probably not at Lanes) to onshore around 7pm tonight.
Which one is right? No idea of course, and I don't particularly care, since I'll be surfing at dawn as usual. You guys check the MC2km map later when they are updated, because they still are the most reliable, imo. 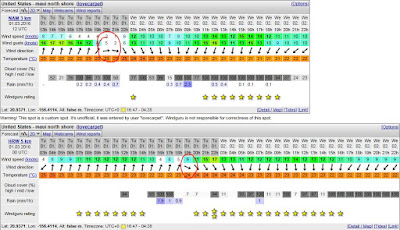 And there we go, now that I wrote all that and published the post, here comes the MC2km update. What a phenomenal waste of time that was! At least I hope you guys understand how misleading all these sources of data can be.
Below is the 10am (what time do I start working today?) map and it's the one that starts showing an onshore flow. Gonna get even stronger by noon. Surf early is my usual recommendation.
If this is correct, forget the Kona wind sailing I mentioned before, but check the other maps if you're really desperate, because some sailing might still be possible somewhere.

It's going to be interesting to monitor who was right on this contradictory wind prediction. 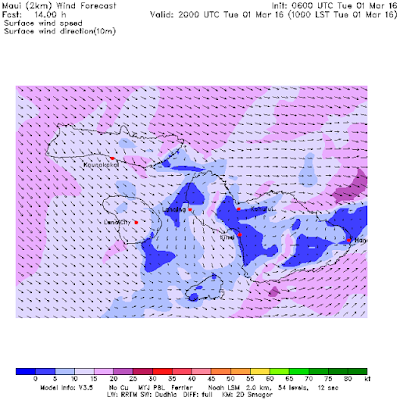