Dawn patrol has been outstanding lately. Last morning there was no offshores, but check the quality of the rides anyway. 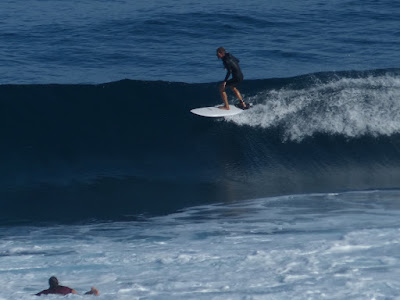 I only had time to take a quick photo before moving on to other perfection (beginner waves for a lesson on the south shore), Jimmie Hepp was at Hookipa later in the day and took this shot of Yuri Soledade. A bit of texture, but still not bad at all. 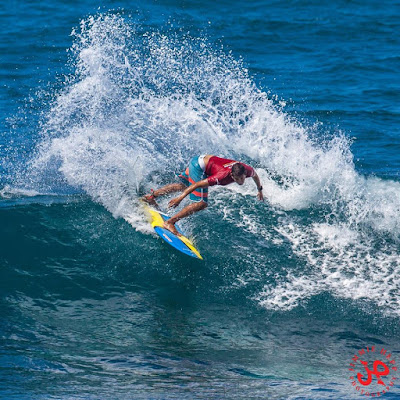 4.0ft @ 12s from 327° (NW)
The first one is the remnant of the northerly energy that has delighted us for the last few days. The NW one should be a relatively new pulse (there were fetches out NW if you scroll down and check 3-4 days ago).
It's interesting to see how those two swells refract in Oahu before they hit the two main buoys over there. To understand that, we need a little map. Take note of the two directions at the NW buoy and try to picture how the NE swell one will refract around the point (with an arrow) and hit the Waimea buoy from a more easterly (less northerly) direction and how the NW swell will refract over the same point and hit the Mokapu buoy from a more northerly (less westerly) direction. 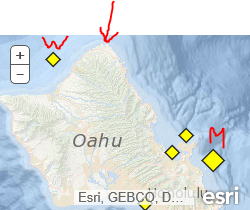 2.0ft @ 12s from 6° (N)
from which we can learn that if a buoy is close to land, it will register the refracted direction of the swells, because that's what hits them.
Now we can guess that those two readings at the NW buoy, would probably translate at the Pauwela buoy as 3-4f 9s from NE and 2-2.5f 12s from NW. What is that at Hookipa? I'm calling chest to head high with eventual occasional bigger sets. Not many of those, judging from the relatively quite ocean I can hear from my window. Of course, the beach report will confirm that (or not).
But in the end, in my opinion, IF you surf Hookipa (I know it takes skills and confidence to "fight" the crowd), it doesn't matter what size the waves are. The wind (or lack of therof) is much more important for the quality of the waves. Tide too, of course. For example, I heard yesterday afternoon was very high and choppy.
Wind more important than waves then? Always! This morning should be paradise again with light offshores that should only last until 10-11am when they're going to be replace by an onshore breeze.
Days are getting longer, I'm posting earlier and I seem not to get the MC2km maps updated anymore, so I'm trying to guess this by looking at the different models on windguru and windity...

Talking about this last one, this is this morning's wind map and shows a full formed and intense NW fetch. It will move towards us (see yesterday's post for the definition of a captured fetch) and send us the last (ahah, just kidding) extra large swell of the winter at 15f 16s on Wednesday. 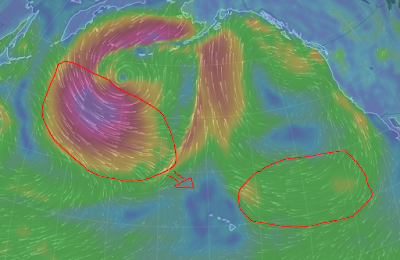 This is the same map that was modeled by GFS (in Windity's brilliant graphical representation) on March 23, so you can see how accurate that model is when you're looking only a few days ahead. 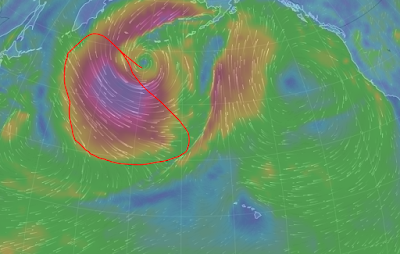