Yesterday morning's conditions (I'm talking early morning) were a delight for my tastes.

As I called them from the lookout, the waves were waist to occasional chest high and blessed by a light offshore land breeze that lasted until around 7.30. I swapped board with my friend Jason.
I got one good wave with his 6.0 Timpone fish and cranked a nice turn on a board that I wasn't expecting to be that loose. But the best part of the swap was to watch Jason rip on my 8.0 Walden Magic Model. He squeezed perfectly into a tiny barrel on a left and the Italian judge gave him a 10. I had my best waves with it pigdogging a couple of beautiful rights, but I need to learn to slow down on my forehand and try to do what he does. I'm very often too far ahead of the pocket on my front hand.

For you guys the reward for reading these incredibly uninteresting information will be the discussion on today's conditions, but not quite just yet.
First, let me fill you in on the fact that the WSL Bells Beach contest' waiting period started yesterday. Here's the page with the forecast.
Here's another interesting page: the Big Wave Award Nominees. The biggest price money is for the ride of the year ($93k!) and my pick goes to Nathan Florence followed by Albee Layers. All the rides in that category are amazing, but Nathan's just looks better with a drop straight into the barrel. It's more like Teahupoo winning over Jaws and this last one winning over Mavericks, for me.

I don't have action shots from yesterday, so here's a sequence of the morphing wave inside the harbor from last week. It needs to be big for the outside peak to get steep enough for someone to catch it. This surfer did just that. 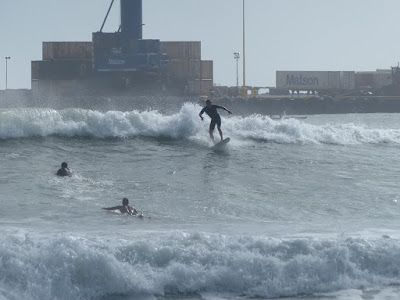 But then the bottom goes deep again and the wave gets soft so you got to pump like crazy to connect to the inside section. This is a lot easier to do on a bodyboard of course, because you got fins, but occasionally surfers get in the mix. 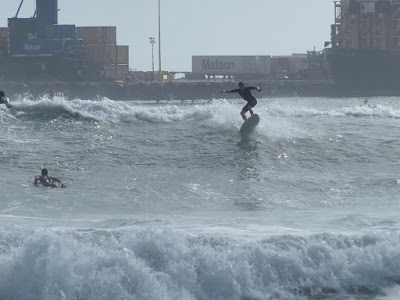 And here's the moment when the wave gets steep again. It's like doing another drop, with the difference that you're standing already. 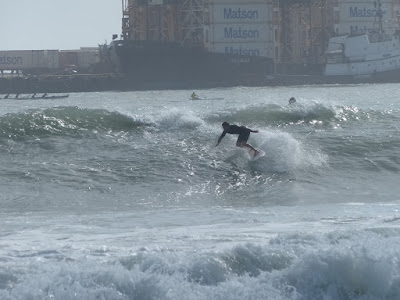 The execution was perfect, too bad he went the wrong way into a dangerous closeout. I got some mean wipeouts on that thing. It's a wave that barrels, that means it's shallow and heavy. 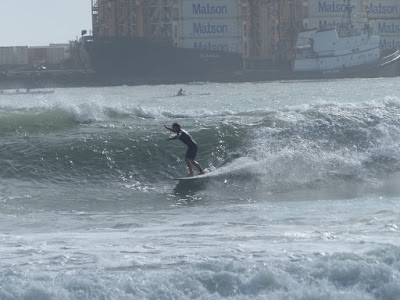 And finally, thanks for waiting, today's conditions discussion.
I would have not wasted all this precious time of yours if it was going to be an epic day. Sizes are small, but conditions are actually clean, so for someone this might as well be an epic day. I'll do my best to be that guy again.

-------------- 6am update and warning: I've been refreshing Surfline's buoys page for the past couple of hours and the readings are always the same without time stamps. It's higly possible that they might old. This makes things even more confusing and I have no idea if what I originally wrote below can be considered true. Beach report will be key today. ----------------

Below the graph of the Waimea buoy that (not sure what time because the time stamp disappeared from the Surfline page) reads:
2.3ft @ 12s from 319° (NW)

1.4ft @ 8s from 29° (NNE)
1.4ft @ 15s from 327° (NW)
and that 15s reading is what I hope is going to materialize in Maui during the day.
No such period readings at the NW buoy, which is instead reading 5.3ft @ 10s from 322° (NW), so things are rather confused and without our local buoy I'm literally groping in the dark. Fortunately soon the sun will come out and I'll post the usual report from the beach. Provided the Blogger app will allow me to do so (been very unstable lately).
Anyway, the waves should be bigger at sunset than in the morning, but of course, the best wind will be early. 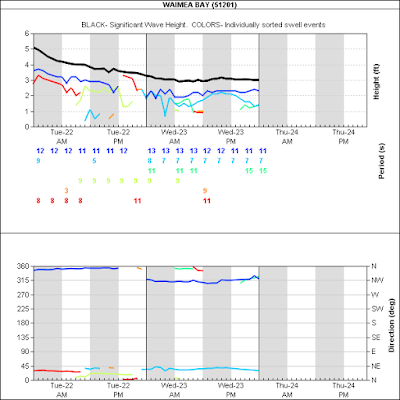 Wind map shows minimal wave generation today, but the tiny fetch all the way WNW of us is going to intensify. Here's how Pat Caldwell describes what's gonna happen. Good stuff.
In the northern hemisphere, the pattern reverts to winter with a low pressure modelled to deepen to 960 mb just west of the dateline at 45°N on Saturday 3/26. It is expected to establish an Aleutian low that should hold on the order of a week with child lows forming on its SW side. This pattern should bring above average WNW to NNW surf locally with back to back events. Wave watch iii is showing the first event on Tuesday 3/29 with surf building to extra-large levels, meaning breakers on outer reefs, by late in the day from 310-330 degrees.
The Aleutian low pattern NNW of Hawaii should keep local winds on the gentle side and minimal windswell 3/29-31. 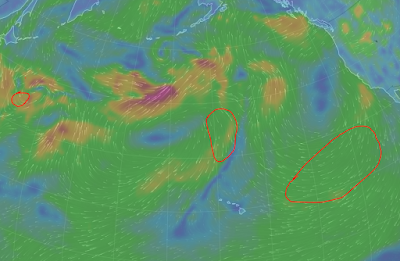 Tiny fetch down south not going to do much for us other than providing more perfect beginner waves on the south shore. 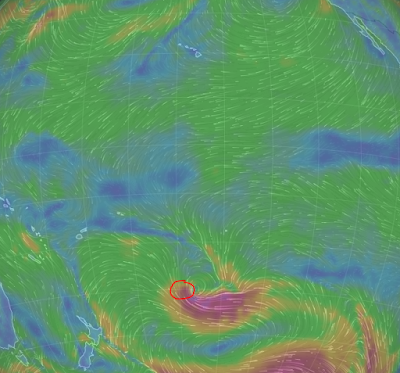 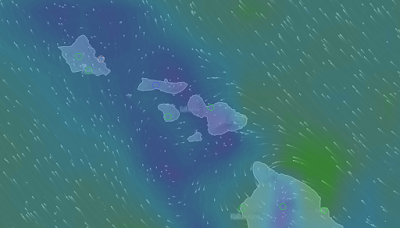