Yesterday was the fifth day in a row with perfect early morning conditions at Hookipa.

Then it got ruined by the kona wind (which later blew strong enough for sailing) around 8.
I took some gopro shots of the session, but I stored them on the disk of new computer n.3 (I'm struggling to find one that pleases me, thank god for the return policies), but when I booted it this morning, Windows had to install 191 updates (!) and it's now at 131. Hopefully I'll be able to update this post later.
Conditions are about to radically change, but I'll remember this streak of surfing perfection for a while. Small waves, no or light offshore wind and not a drop of water out of place.

2.1ft @ 5s from 265° (W)
1.4ft @ 9s from 8° (N)
0.9ft @ 11s from 318° (NW)
The related graphs are below, I put an blue arrow on the short period component at the NW buoy and a red arrow on the long period one.
Here's what Pat Caldwell wrote about that:"Proximity equates to above average surf size locally as well as more confused breakers, since the shorter period wave energy within 270-330 degrees should fill in at the same time as the long-period swell generated further away." 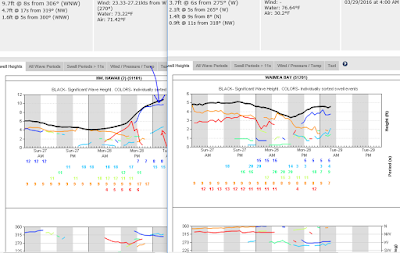 Not much of long period energy at Waimea yet and not much leftover from that lovely northerly energy, that means that dawn patrol in Maui will be pretty much flat. The NW buoy got to 4f 17s at around 2am, that means that that energy (or whatever leftover after the extra travel time) will hit Maui at around 8pm. That's later than what predicted by the WW3 model and its Surfline graphical representation below. According to that, at 8pm there should be already 8.7f 16s, but I don't see that happening. Check the buoys later in the day to have a more precise idea of the arrival time and keep in mind GP's rule of thumb of the travelling time of NW swell from the NW buoy: 12h at 18s, 15 at 15, 18 at 12. 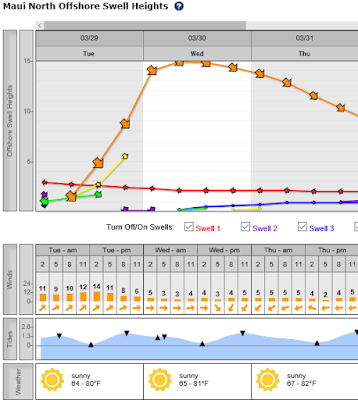 The "late" arrival of the swell is a bummer, since it could have been a rare opportunity for all the port tack windsurfer specialists presently on the island to sail Jaws on a Kona wind day. That's how the wind map looks at noon on windity, but you guys know that from the wind point of view the MC2km maps are much more detailed and reliable, whenever updated (link. n17). 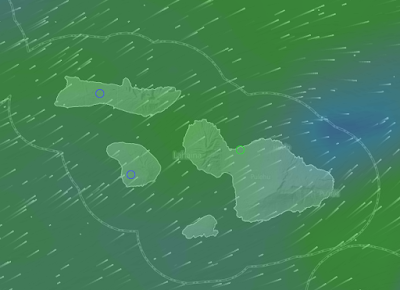 That's how the large scale wind map looks like, the fetch weakened (but still making some waves) and its head is very close to the islands. 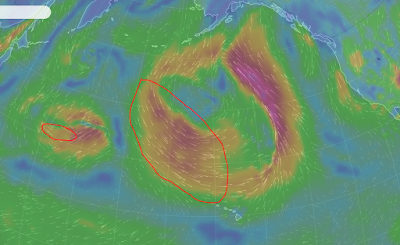 Not much of a front associated with it, we're just gonna be brushed by the very tail of it. Satellite image at 4.30am. 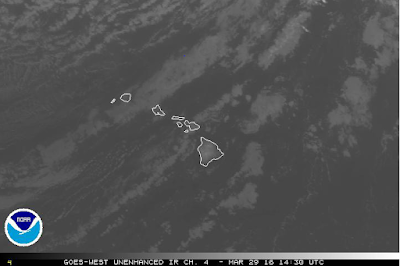 There we go, Windows updates are 152 of 191 and I'm in no hurry to go dawn patrol with those poor readings, here's some other kind of updates.

7.0ft @ 8s from 307° (WNW)
6.7ft @ 15s from 322° (NW)
while the Waimea one still doesn't show any period higher than 11. That means two things:
- late arrival (compared to the forecast) is confirmed in Maui, but the afternoon will still definitely see waves on the rise
- this start of this swell is gonna be intrinsically messy, hopefully the kona will clean it up a bit.

And here's the noon map from MC2km. No kona wind sailing at Jaws (for lack of waves), but plenty action at Lanes. 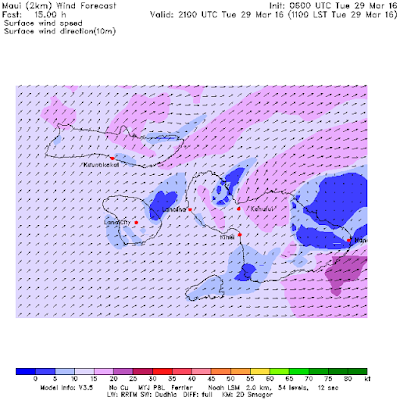 And this is a screen shot from the mama's cam, I'm not even gonna bother taking the one minute drive. 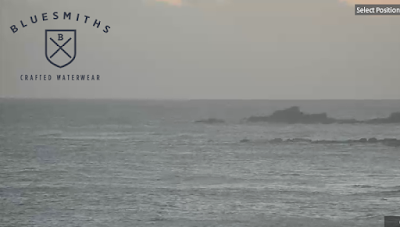