Too small to run the contest at Honolua yesterday, but still plenty size at Hookipa.
This shows you what a difference the shadowing of another island can make. Sailor Patrick Bergeron, photo by Jimmie Hepp. 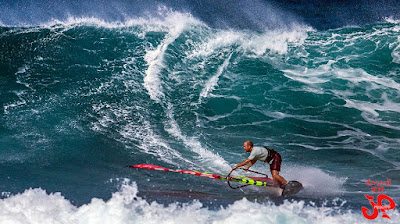 Wonderful readings this morning that show the remaining energy from the actual swell (4f 12s still really fun size) and the very first energy of the new one.
This is a classic example of why I think the surfline breakdown of the buoy readings is far superior to the one single number you get if you read the buoys on the NOAA site.
At each single moment, there's multiple swells in the water and therefore multiple readings are the only way of describing that reality.
Notice how different the direction of the very long period readings are. I noticed that when a swell is small in size, the buoys often fail to register the direction correctly, which is quite understandable, specially if there's more swells hitting them at the same time.
The Pauwela one is particularly wrong. 25s from 30 degrees are extremely rarely. You would need an extremely strong and at least stationary (as opposed to moving east) fetch for that and there have not been any in that position.

So that's clearly a glitch, but with the help of the other buoys we can have the confirmation that that is the sign of the new swell. Almost 3f 18s at the NW buoy, 0.4f 22s at Waimea, 0.2f 25s in Maui... lovely uh?
If you remember the travelling time table, that means that Maui will see sets in the late afternoon.
But you better double check if that direction at the NW buoy stays 292, because in that case the shadowing of the upstream islands will be major.
Like most storms in the north pacific, this one travelled from west to east, so the direction of the related swell will start more westerly and then turn more northerly.

Today's wind map below shows more of the same scenario. The big fetch north of the islands is still the same that generated the new long period swell that is just starting to show at the buoys today. But it generated it 3-4 days ago when it was in a much more westerly position, like the new smaller fetch I circled in the NW corner. Scroll down to the previous posts if you want to visually see that.
That little fetch down south is looking a little stronger today, but I still don't think it's gonna send us much. 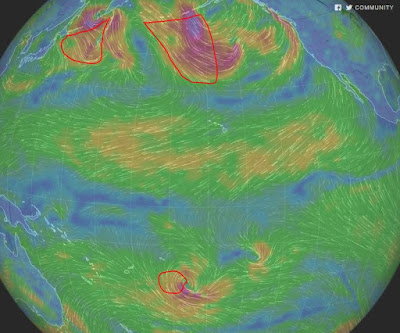 Going back to the multiple swells, here's a couple of ways of graphically representing a forecast containing multiple swells.
They both are taken from Surfline and they both show content that comes with the subscription.
I think I'm not supposed to publicly show them, but since I don't do it regularly and I am going to spend good words about it, I hope they won't get pissed.

This one is a table. It's easier to load on a mobile device with slow connection and it doesn't require any interaction to display its whole content.
Four major swells up in the 10f 15s or more range in first two weeks of December confirms the jet stream trend I was announcing in the previous posts. 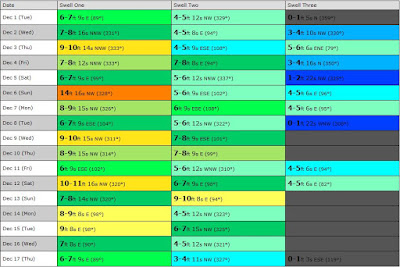 I much prefer this graphical representation though. Overlapping graphs of swells are a much better representation of reality. One swell goes down, another one goes up, wind swell stay steady and so on.
Mouse interactions are required to see the whole content, so not the best for smart phones, but unbeatable with a computer. 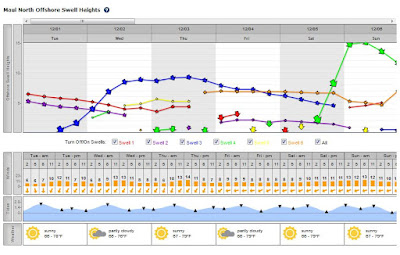 PS. My guess is that both Honolua and Sunset Beach contests will have a lay day.
PPS. I just checked the 6am long period buoy readings. The NW one went to 3ft @ 18s from 317° (NW), the Waimea one disappeared, the Pauwela one stayed steady from 0.2ft @ 25s from 35° (NE).
You'll see all of them slowly getting less glitch as the day goes on.
Posted by cammar at Tuesday, December 01, 2015