With the lighter more sideoff wind and some big waves, the afternoon at Hookipa was totally epic for the elite of windsurfers that could tackle the conditions. Below is Browsinho in a photo by Jimmie Hepp (check the whole gallery, there's plenty great shots!). 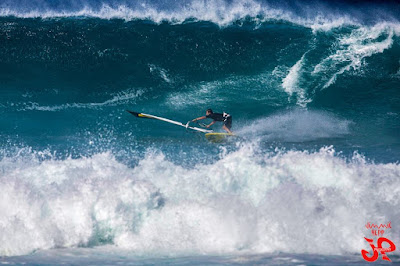 I instead caught the first wave since Nov 5th at thousand peaks (fun knee to waist high). Felt good to be in the water, felt not so good to see that I'm still far from 100% recovered, but that I knew already.
The best setup was on a longboard with this piece of foam I built (thanks blog reader Cathy for the original idea that I elaborated and customized) inside my wetsuit top on a longboard.

I will have to take a selfie with it on, because it looks like I have the biggest, squarest boobs you can think of and I get some looks that are quite interesting. Good lineup chat line, that's for sure.
The idea is to move the pressure from the lowest ribs (where my damage is) to the ones just above when laying down and paddling and it works quite well on a longboard.

It doesn't work on a shortboard, since it pushes the nose down too much (I actually added three more layers of foam in the final version).
Standup was fine for catching a wave, but once on a wave if I wanted to push my turns I had to use the paddle heavily and I felt that a bit. So I started to ride more mellow, but riding mellow on a sup felt quite boring, really.

So I'll stick to longboarding on small waves on the south shore. 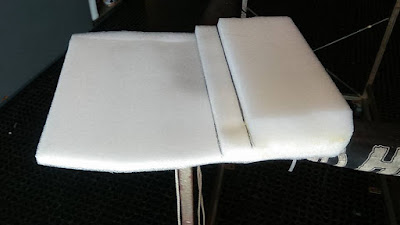 We are in the beginning phase of a weather change that is beautifully - as usual - summarized by Pat Caldwell:
After an extended period with jet stream troughs west of the dateline and ridges to the east, which led to below average local surf from WNW to N and above average local trades and easterly windswell, a regime change began 12/26. A large upper level low pressure is being established over the north central Pacific and Bering Sea with the primary jet stream track at a southerly position in a mostly zonal, or west to east, pattern from near Japan to the longitudes of Hawaii. This is leading to a flip flop for local surf and wind, with above average WNW to N surf and below average trades and trade windswell in the upcoming period.

1.6ft @ 10s from 217° (SW)
As the Pauwela graph shows below, yesterday's big episode is quickly going down. 4.5f 14s is still a hell lot of fun, specially with the lack of wind, but that is going to decline all day. Don't forget the windswell.
A new WNW pulse is forecasted to fill in later today, but the reading at the NW buoy is from WSW and I'm not even going to try to understand that. No idea why.What I know is that we won't get much from that direction.
Barbers shows 3f 13s and I might have to go chase whatever is leftover on the south shore before it temporarily goes flat again. 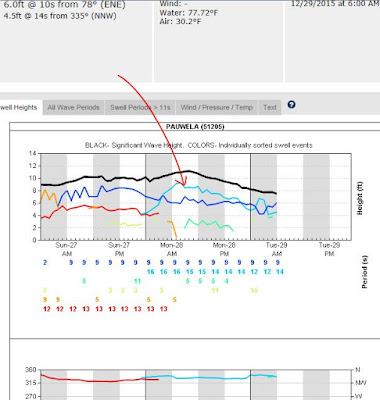 That is to try to explain that, even if the Surfline buoys try to give you the breakdown of the different swells in the water (and that is great), inside a single swell that you might observe at the buoys, there's always components of different size, period and direction.

Most surfers are familiar with sets of different size, but there's also plenty variety in period and direction.
I'm sure most of you have observed sets coming more from the west or from the north at Hookipa...
The world of wave prediction has very little black and white situations. It's more like fifty shades of grey. Of blue, actually.

Notice also how the Hawaiian islands are in the middle of a small area of no wind. The area is small, so the lack of wind won't last long and tomorrow a NE breeze is already forecast to blow.
Get them today is my strong recommendation. 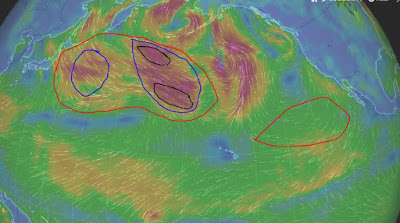 MC2km map at noon shows the pause in the wind I was talking about. 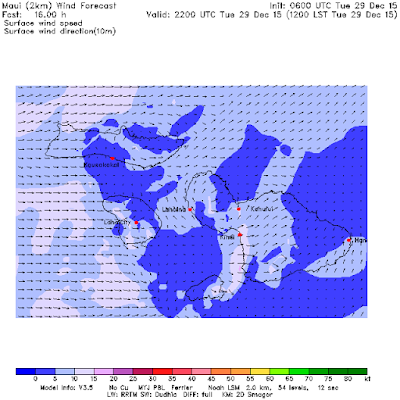 Gp, maybe try the foam roll method one time to compare...it takes the pressure only on the sternum, so less movement for the rib cage as a whole.

Yo Cathy,
are you saying that your foam roll was vertical?
If yes, how did you handle the left and right tippiness?

If it was horizontal instead, I still like mine better. It doesn't move much up and down and it has one layer of thick foam to protect the injured lower ribs from accidental impacts.

I'm curious to know in detail how yours worked.

Yes, it was vertical. I guess my abs handled the balance issue, but when paddling it didn't bother me. I too enjoyed the extra lift off the board...nice break for my neck! Yours is impressive tho, i can see how it would work and happy to hear it does.