Waves at Hookipa yesterday were logo to mast high.

I know that's not surfers slang, but this is what logo high literally means and mast high would be a couple of feet more.
A windsurfing mast these days is around 4m which translates into 13 feet faces which translates into 4-5 feet Hawaiian... doesn't make any sense, I know. That's why I'm never going to use that scale and I encourage every reader to do the same. Photo by Jimmie Hepp. 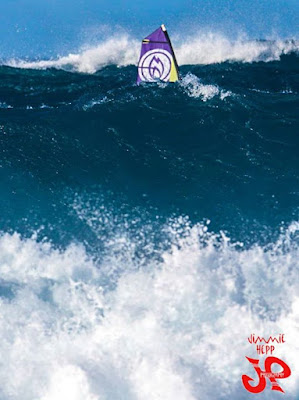 I had a spare 30 minutes in Kahului and I went to Kanaha (horrible place to take pictures) where the waves instead were head to logo high. This one is head high. 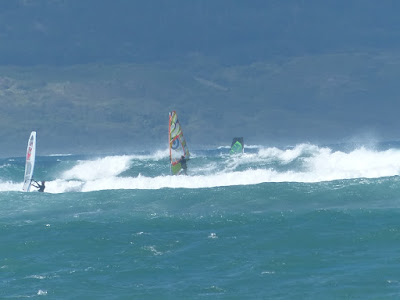 I heard (without finding any official confirmation) that no spectators will be allowed both on the cliff and in the ocean (only competitors' boats or jet skis).
I even heard they might do a pay-per-view webcast, but I don't quite believe it. If they do ask for money, I will not watch it and I encourage you guys to do the same. Otherwise, if they succeed, every contest after this will be pay-per-view... and I sure would drop some decent money to watch the Pipeline one! We'll find out, I guess.

Wind map shows the fetch that will generate Wednesday's swell getting a bit closer. It will keep doing that and it will also get much more intense, since some cold air is about to drop into it from the north pole. That's going to be another massive one. 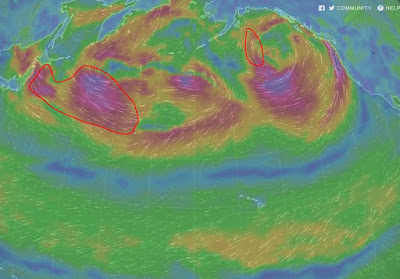 South pacific wind maps shots the same fetch of yesterday with slightly less blockage from New Zealand. I would not get too excited though, since that section of it looks pretty weak. 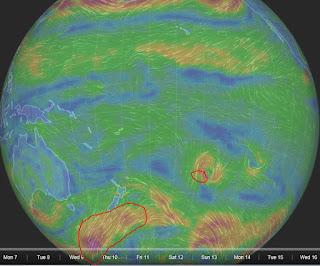 MC2km map at noon shows the wind that it shows. Quite easterly, so as usual in these cases, it will fill in better and earlier more up the coast. 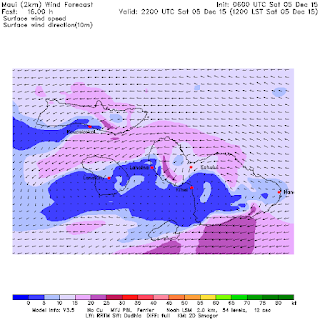 Today is one month from my injury. I'd like to share some thoughts in case someone happens to have the same.
The cartilage of the lower left ribs got disconnected from them because I hit my board surfing.
It was the morning of the double elimination of the Masters at the windsurfing contest and that means I missed out on a bunch of fun heats, but that's not relevant.
This is different than breaking or bruising a rib. We all know how painful this last one is specially when coughing, laughing or sneezing. Instead I never had too much trouble doing that. My problem were the hiccups and/or those little baby burps one does pretty much after every meal (trust me, we all do them... you just don't notice them). Even a small one of those would make the cartilage pop (move inside the rib cage) and that was not fun. I had to chew my meals a lot more and a lot slower to avoid them. I also had to make my average meal a lot smaller.
The first three weeks were a nightmare. Literally, because the worse part was when going to sleep.
I would lay in bed and sooner or later I would realize the cartilage was not in a good place (it was too uncomfortable/painful) and I needed to somehow adjust it in order to manage to fall asleep.
After a while I figured a way to make it pop that worked most of the times. It's a strange feeling when you know you're doing something that will initially hurt like hell, but it's necessary.

Sometimes it took me up to an hour to achieve that. Some other times I wouldn't manage to achieve that on my own and I would give up and just lay there in too much discomfort to fall asleep and wait. And wait. And hope that it would do it on its own. And wait some more. And then I would feel (and physical hear!) a snap inside my chest with a resulting big pain. But I knew that after that it would subside and I would manage to sleep. That wasn't fun.
I spoke to two famous windsurfers who had the same injury: Jason Polakow and Keith Taboul. Incredibly enough, once I told them what I had, they both pronounced the same exact words:"oh no, that's the worse!". And they went on telling me they had the same exact popping and clicking nightmare. They also both told me that after a (long) while it healed completely and that was of much comfort, because at one point I started doubting that it would never heal.
"How can it heal, if it keeps moving?", I was thinking. But the body has an amazing ability of healing itself, so you just got to have faith in that.
In fact, the injury got slowly better and now the clicks and pops are getting less painful and frequent.
I also helped it with different treatments and techniques, some of which I might describe in later posts.
Last night was the first popless sleep and I feel like celebrating a bit.
I know well that the pops might (and probably will) happen again, but it doesn't really matter. It's healing. So don't freak out if something like this happen to you too.

One last advice, which applies to all kind of injuries. Not sure it will work for everyone, but it's working nicely for me.
I did not even ask the doctors how long it would take to heal. I do not want anybody to tell me that. Because injuries and bodies are all different.
When someone asks me how long it's still going to take, I answer:
"it's going to take as long as it's going to take. And every day is a day closer to that day".
It's the only way not to be disappointed/pissed/frustrated. As a matter of fact, I haven't surfed for a month and I can't believe I'm doing just fine with that. Well, kind of... but much better than last year's knee injury that saw me increasingly pissed off each day I figured it was going to take longer than I thought.

In the last 5 years I had the following injuries: a broken foot, a meniscus surgery, a big hole in the head (by far the scariest) and now this. I surf/windsurf every single day and I consider the above list pretty light. Injuries are part of the game and it's also matter of luck how bad they will be.
Said this, I'd like to send some good vibes to one of my favorite surfers in the Middles lineup that recently lost an eye while surfing on thanksgiving day.
Not sure you're reading this brother, but I hope to see you back in the lineup soon.
Posted by cammar at Saturday, December 05, 2015