Yesterday was such a poor conditions day pretty much everywhere that I didn't even look for a local action shot. So I'm posting this shot of Michelle Bourez by Ben Thouard. Not sure when it was taken, but click on it and observe the scary reef right in front of the massive wave. Tahiti is a place that I would love to visit, but not to surf really. Too dangerous for my taste. 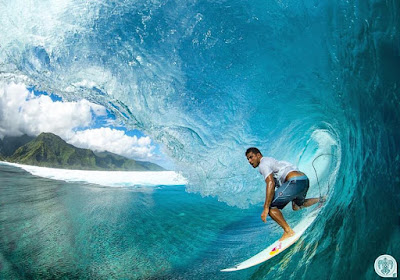 There we go, as soon as I wrote that I received an email with a shorebreak shot from Rise Lively taken yesterday at Makena. Maui always has something going on. 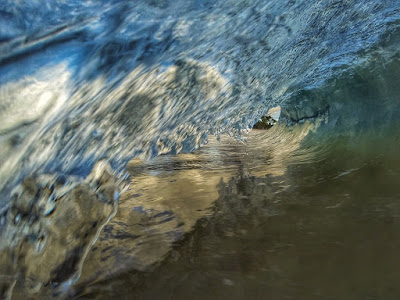 Buoys.
The graph of the three buoys below shows the new swell peaking at the NW buoy around midnight and around 10+ feet 14s. That means that the same will happen in Maui in the afternoon, minus a couple of feet lost on the way. Still pretty big for even some outer reefs to break.

This is the Pauwela reading at 6am:

As you can see, without a decent fetch anymore (check the wind map below) the windswell immediately went down. The only reading you should focus on is the 18s one. Everything else, you can consider it as noise: it would be better if it wasn't there.
The massive NW fetch indicates more big waves on the way. Surfline calls for 18f 18s mid Monday, but we'll talk about that in the next few days.
I also like the fact that the islands are sitting in a relatively light wind area, so today should be nice from the local wind point of view. Specially in the morning. 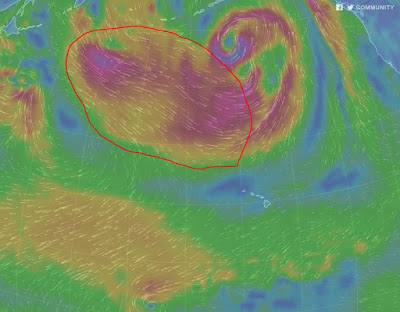 MC2km map at 1pm in fact does show some wind up the coast in the afternoon, so get them early when they're clean and not too big yet.