Congratulations to Adriano De Souza for killing it yesterday and winning both the WSL World title and the Pipe Masters. Very much like the year that Parko won.

The WSL/Masurel photo I grabbed from this gallery is from the day before though, and that is for two reasons:
1) I feel like thanking the retiring CJ Hobgood for all the wonderful surfing and the spontaneity in his interviews and overall behavior
2) the waves were 100 times better than yesterday 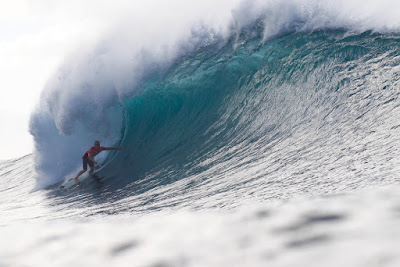 This WSL season saw an incredible improvement in the production of the webcasts that went totally mainstream and professional. Too many little details to list. But of course they still have room to improve.
My biggest suggestion (other than getting rid of the annoying Dave Stanfield and his uninteresting stats and commentary), is to make better... morning calls.

They did a pretty good job overall, but Pipe was a disaster. Can't finish the whole season with such an ideally dramatic and open to all scenarios battle for the title in shitty waves like that!
In the previous days they had much better conditions than that. Take Monday for example (the day of that swell that surprised me). Or Tuesday afternoon. From 2 to 4pm it was slow but much, much better than yesterday. With a couple of hours here and a couple of hours there, they could have finished Wednesday in glorious waves like the one above.

I have no idea of how much it costs to keep a contest (and the whole production crew) on hold for half a day. I'm sure it's a lot of money, but having a final day with very average waves like yesterday must be an economical damage too. The more epic the show is, the more people will watch it and the more fans will be following the next contest/season (which translates into advertising money).

The Peahi contest was a clear example of that. It was called the right day, the waves were huge and the show was unprecedented. I saw photos and videos of it on facebook for the whole week after it.
And that's how you grow your fan base.

That's my little rant, let's move on to a photo taken by Jimmie Hepp at Hookipa yesterday. Matt Meola doesn't like to compete and stays true to his free spirit surfing. 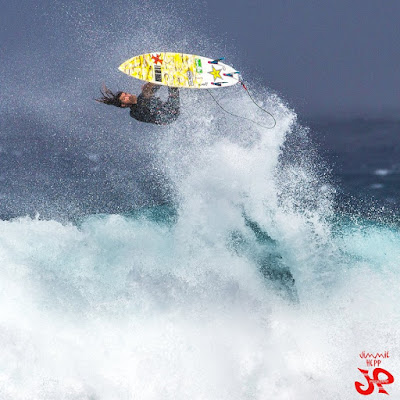 4.5ft @ 8s from 53° (ENE)
4ft @ 5s from 71° (ENE)
0.5ft @ 20s from 60° (ENE)
and that means that it's all about the windswell. That is going to be the case also in the weekend, even though a small north swell is forecasted to pick up this afternoon (made by the fetch that on dec 16th I said is shooting mostly to the west coast... scroll down a couple of posts for it). I don't see it at the buoys anywhere, probably completely shadowed by the raging windswell.

Wind map shows a fetch in the NW corner. The related low is massive (944 in the center), but it's north of the Aleutians and is going to move even more north. The high north of us is just as massive (1035) and not going anywhere. 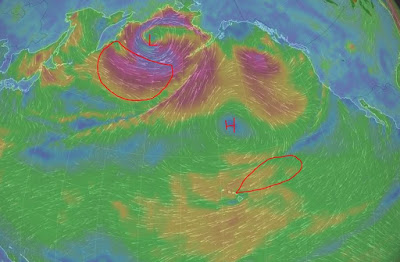 Strong wind, huge chop and poor conditions over the north shore.
Remember, never ever under any circumstances get excited about a strong wind forecast in Maui. Not even, and actually specially, if you're a windsurfer/kiter. The stronger the wind, the more squalls there will be and the more up and down the wind will go and because of that, in the end, it's never really as strong as they predict.

Said that, the MC2km map at noon below shows the wind that it shows. 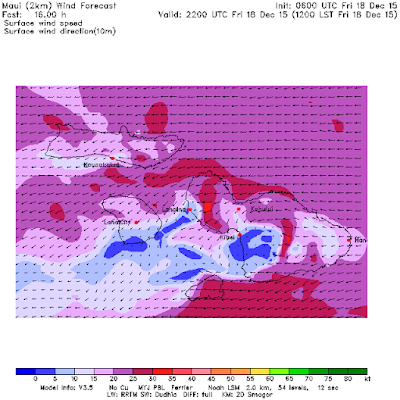