Yesterday saw beautiful surfing conditions in the morning on the north shore (Hookipa still had DOH+ bombs) with a bit of wind for the rest of the day. I don't have photos, so I'm gonna use another one from the Jaws contest, since it has a pretty unique perspective. Albee Layer pulls in a barrel on the ground floor, while everybody observes from the upper floor. Photo by John Patao. 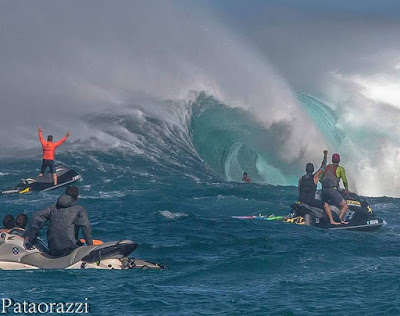 No sign of the new big swell at any of the buoys yet. That means we won't see much of it today in Maui, but 4f 12s is still an extremely fun size. I'd be all over it if I could.

The Pipe contest starts today. Despite the lack of readings of the new swell at the buoys, according to the surfline forecast, there should be long period forerunners hitting Oahu in the late afternoon.
Assuming 4f 13s (with the period going steadily down) is not enough for Pipe, If I was the contest director, I would keep everybody on hold and wait for a possible start of round 1 in the afternoon.
But I noticed that they very rarely do that. It must have to do with the cost of keeping the whole production crew working all day and/or the permit they have.

And I would do that because Wednesday seems too big to run a comp at Pipe (but I sure hope that I'm wrong about that!), and so the good days would only be Thursday and Friday. Saturday looks like it should be just like this morning in terms of size. And not much after that.
Not having all the logistic information and not knowing shit about Pipe, I shouldn't try to make these kind of calls, but I just can't resist.
World title is on the line and if you are a WSL big fan like me, you can't wait to see how it goes.
BTW, I put my money on Medina many months ago when he was still way back in the rankings...

Oh, check this out! An official surfline video forecast on youtube, that's rare.
Mr. Warren seems to be much more optimistic about today than me.


Wind map shows still a pretty intense fetch up there and that makes me think that the waves should be pumping more than what the forecast say all the way till Friday. We'll see.
It also shows a small fetch down south, 1 to 2 feet south swell in a week. 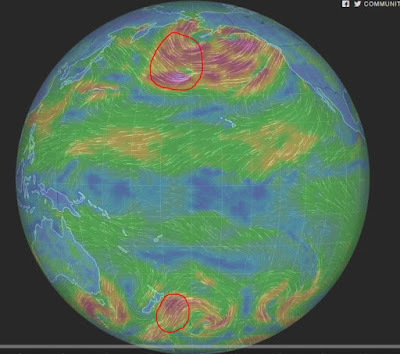 That fetch is so big that it deserves a proper weather map. The west coast will see massive waves. At the moment, Oregon and up have onshore winds, while central California is glassy and south of it it's light offshore. Pretty common scenario.

MC2km maps not updated yet, I'll add the noon one here as soon as it becomes available. Trying to see what the wind will do in Maui using other websites at 5am feels like a waste of time.
The real question is: why the hell am I awake at 5am if I can't surf???

There we go, the map is available now and it shows a classic configuration of a day with straight easterly trades. The wind will hit Hookipa first and then eventually the wind line will make its way down the coast. Very clean surfing conditions in the morning. 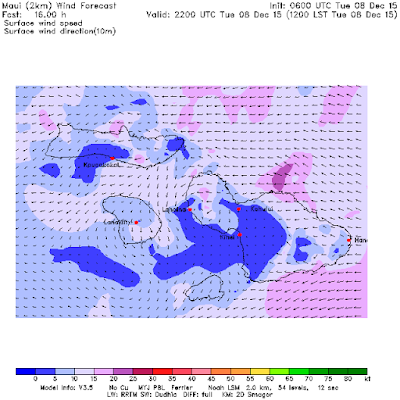 Very clean conditions at Pipeline webcam too, but that still seems a bit too small for a WSL contest, IMO.
Watch the Dawn Patrol show at 7.30 to find out. 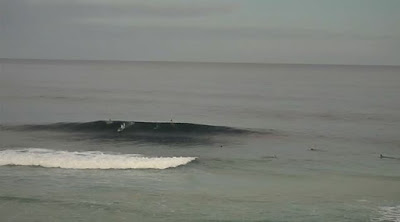 And, last but not least, the 6am readings at the NW buoy include 2.2ft @ 15s from 317° (NW). Not a particularly long period for the start of a new swell, but it is a start. I hope they wait for it to arrive in Oahu in the afternoon.