Thanks to the sideoff wind the waves were again pretty clean all day at Hookipa yesterday. 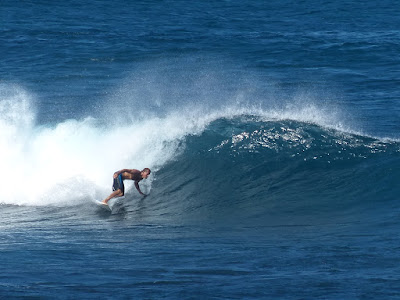 Yesterday evening the NW buoy was even up to 9f 10s from straight N. Well, don't get too excited, because those waves are never gonna make it to Maui, IMO.

Let's see why by looking at yesterday's wind map. I put a red arrow at the tip of which is where the NW buoy sits: 24N and 162W.
There was a small fetch oriented straight North to South (thick arrow). Nothing major but, due to the proximity, I believe that is where that energy came from.
And the readings at Hanalei and Waimea could be the angular spreading of it, which is not hitting Maui instead. That's my best attempt to justify those readings.
Maui has only windswell from 62 degrees and that is still much better than nothing. 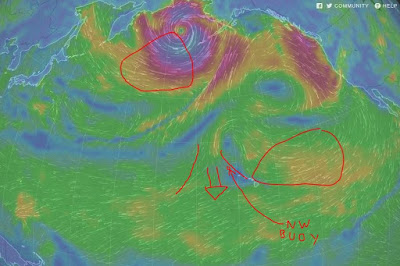 Also because the wind should be again light ESE and that is just gold. Take advantage of it until it lasts, is my strong recommendation. I just did a 2 weeks windity run and I could see strong trades (with small to medium NW ground swells here and there) till the end.


Today's wind map shows that the little low I just elaborated about is pretty much gone. It also shows a weak fetch in the NW corner and the usual windswell cone. 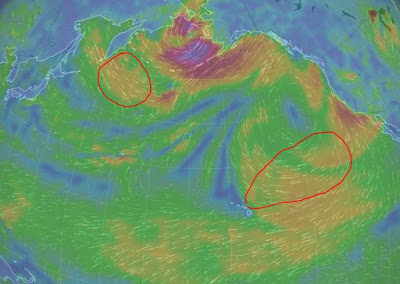 MC2km map at noon shows the wind that it shows. Choose a spot that is exposed to the windswell is my recommendation. 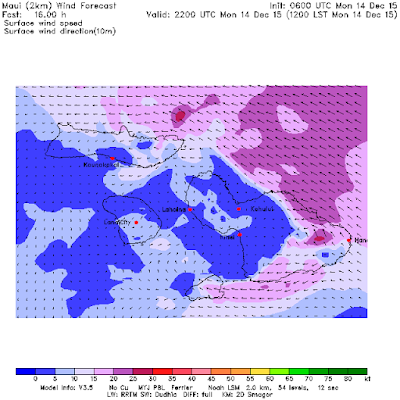 Last but not least, I'd like to thank the blog sponsor SurfersList for renewing their banner.
SurfersList is a classified ads website for the watersports community that provides a platform to post surf, windsurf, kitesurf, and SUP equipment for sale. To learn more, view the short video "What is SurfersList?" (1:07min).

A couple of hours ago, Pauwela was reading 6.5f 9s from 25. Hookipa was solid head high and clearly with a lot of north in it more than east.
I felt the urge to investigate further and finally I found the fetch that I was looking for this morning.
I apologize for the mistake.
Below is the weather map of Dec 11. I circled the fetch of the low that created this northerly energy.
The low moved quickly to the ENE and wasn't even on the map the day after. So, the swell is not gonna last long, but it looked really fun and uncrowded. 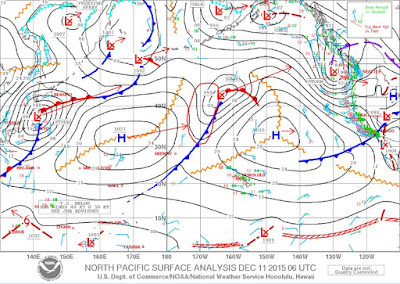 That day I posted the wind map below. I chose to capture the whole world because there were a couple of small fetches down south and I failed spotting that northerly fetch.
Might have to stick to close up maps in the future. 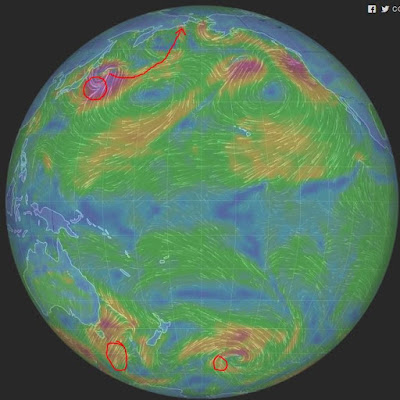