I would like to thank a couple of new blog sponsors.
One is a mainland reader that has a construction business and comes to Maui often and showed his appreciation for my blog by buying one month of banner advertising (email me if you can't read the contact). I like seeing supporting readers' business cards up there.
The other one is the local business Maui Regenerative Medicine.
Thank you both.

Round 2 of the Pipe contest went down yesterday. Dusty lost a fun to watch heat against Kelly Slater and we won't see him on tour next year. So much talent on this island that is surprising not to see any Maui surfers on tour, but I believe it's only temporary. Photo (round 1) by Cuda Shots. 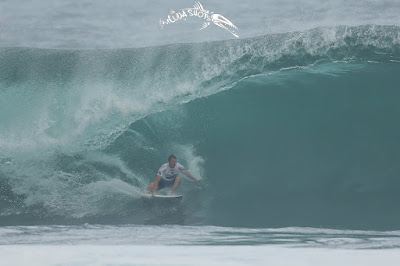 The one sport where there would be plenty Maui guys on top if there was a proper world tour, it would obviously be windsurfing. The photos below show the wave size at Hookipa yesterday. 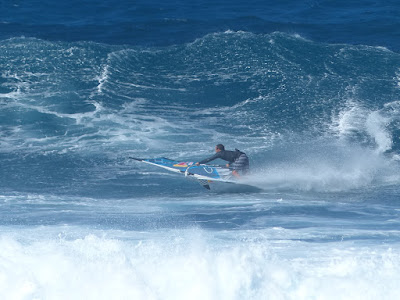 Notice how much Levi moves his back hand on the boom in transitioning between bottom and top turn. 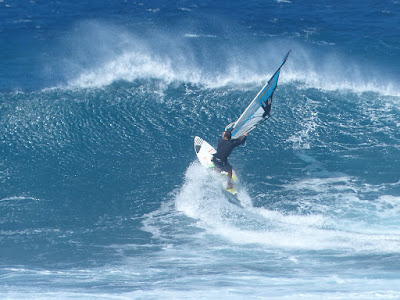 No more NW energy at the NW buoy, even though Pat Caldwell was calling for an small increase on Sunday. We'll see what tomorrow shows.
In the meantime, 4f 13s is as fun as it gets (at least if you have my skill and preferences), so go get them. And it should be pretty clean all morning since today the wind will be even more offshore than yesterday. MC2km map at noon shows just that. 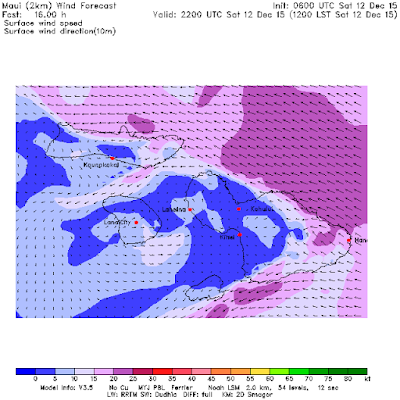 Wind map shows a wide and strong fetch in the NW corner, which will provide a decent swell to finish the Pipe contest. The swell will peak on Wednesday, and hopefully Tuesday it's going to be big enough to compete, otherwise they will have to finish on Thursday with small waves. The fetch in fact, is still modeled to quickly go north behing the Aleutians.
I think I've been wrongly referring to the Aleutians as Kuril Islands lately. I apologize, that was an extended brain fart.
Two weak fetches down south won't do much, but will keep the south shore from going completely flat. 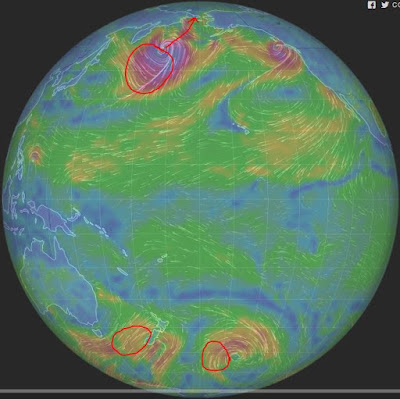