Couldn't find a decent shot from yesterday, so just in the very remote case that someone has still not seen it, here's Kelly's wave.
They did a really good job, but I would probably get bored after a while.

At 3am Pauwela reads 11.1ft @ 8s from 66° (ENE) and once again, it's all about the windswell.
Surprised about this much wind in a strong El Nino year?
Here's a Pat Caldwell quote from some video clips I was lucky enough to put my hands on:
"the average number of giant days (Hawaiian scale 20+) in strong el nino winters is 4. 1985-86 had 13 giant days despite being a neutral el nino year (actually slightly negative).
Mother nature doesn't like to be put into the cookie cutter..."

Wind map below shows three fetches:
- one in the NW corner
- the windswell one
- an out of season compact but decently strong south one. 1 to 2 feet swell in a week. 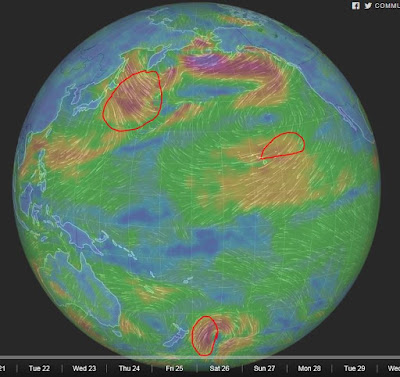 MC2km map at noon shows the wind that it shows: a hell lot of it. 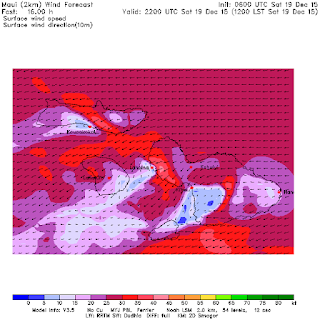