Bit of a transition day at Hookipa yesterday between an old and a new swell, the windsurfers are enjoying a remarkable streak of days of wind a waves.
Sailor Andres Martinez, photo by Jimmie Hepp. 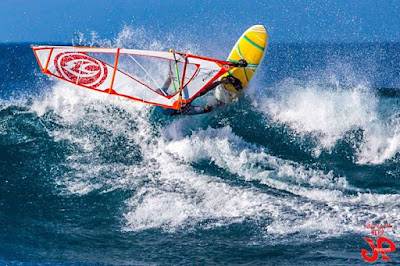 Obviously today the attention of most people will be focused on the contest at Jaws. Here's an official announcement from the WSL:" Please be aware there is no public access available to the Pe'ahi Challenge Big Wave Tour competition being held December 6 at the Maui surf break also known as Jaws. The cliff edges surrounding the break are private property and the event permits limit the number of personnel and vehicles in the area due to safety and environmental concerns. Big wave fans can catch all the action live on the webcast at WorldSurfLeague.com"
Well, at least it's not going to be pay-per-view.

Let's jump into the buoys. Here's the graphs of NW, Hanalei, Waimea and Pauwela. Notice:
- how the graphs all have the exact same shape
- how the swell lost a couple of feet between the NW buoy and Kauai
- how the other swells seems to have disappeared from the readings. Of course they didn't disappear from the water, it's only that it's hard for the buoy to register a 3f 12s swell while it goes 13+ feet up and down every 17 seconds.

The NW buoy peaked at 17f 17s around 4pm yesterday. The Pauwela's reading at 5am is 13f 18s from 324 and that is the peak, IMO. I put a red dotted line to indicate what I guess the rest of the graph will be for today.

So pretty massive waves, I'd say. 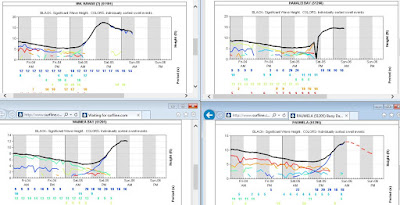 Below is the MC2km wind map at 8am. Pretty strong ESE, at least it's gonna have a touch of offshore that will make the west bowl barrel, but negotiating the chop in the drop and managing to actually see something when paddling will be a hard task for everybody.

Don't forget that 17s waves travel at 26 knots and even though they might slow down a bit when they start feeling the bottom, that speed adds to the offshore wind and the apparent wind the surfers will have in their eyes will make it really hard to see.
Like if it wasn't difficult enough already. 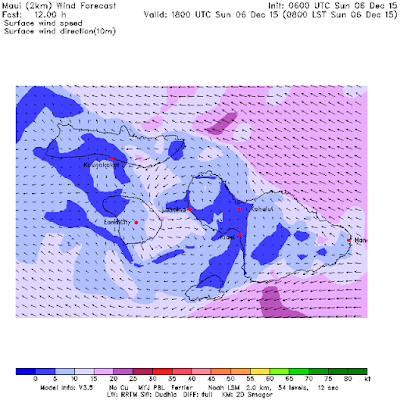 This is the MC2km map at noon. Slightly lighter wind at Jaws, not sailable at Hookipa, possible slog and surf at Kanaha. 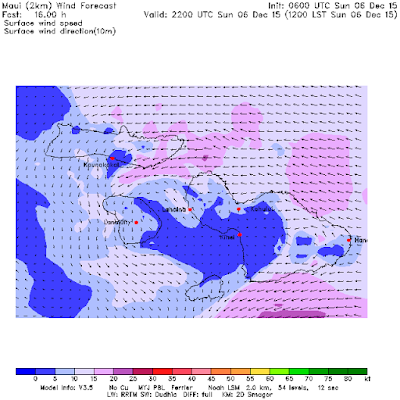 These are the competitors (I circled the Maui guys).
Round 1 coincides with the quarterfinals. Six men heats, first three advance to the semis is my guess. And since I'm in guessing mode, I'm gonna guess a heat duration of around 45 minutes.
It will be interesting to see if they're gonna use the priority or not.
What I'm not gonna guess is the winner. Too many good surfers, they all can win. 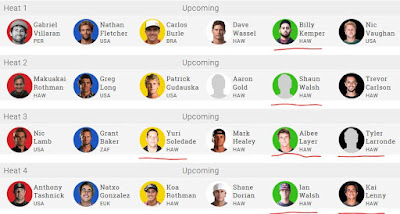 Below is today's wind map and it shows another massive fetch. Wednesday's swell is going to be just as big. The Pipeline contest starts on Tuesday... 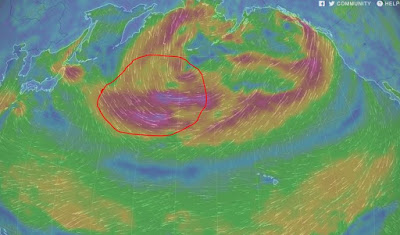 That's it. Enjoy the show (should be a good one!) if you watch the contest, enjoy Maui if you decide to go surf. Kahului side will be light offshore in the early morning and possibly still manageable size. Otherwise, west side.
Posted by cammar at Sunday, December 06, 2015