The Peahi Challenge was a great show to watch. Photo by Jimmie Hepp.﻿ 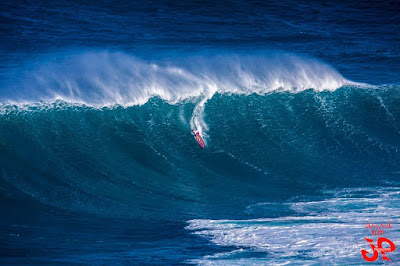 In line with the swell prediction, the first heats were the best ones from the wave size point of view, the last heats were the best from the competition point of view.
In fact, some of the surfers were invited because they were in the big wave tour rankings, but they had little to do with the place. Any local would have caught more waves than them and done better.
As a matter of fact, the locals (specially the Maui guys) dominated most heats, with Billy Kemper taking the win.

The webcast production was excellent as usual. I was first bummed to see that Dave Stanfield was part of the commentating team (all those uninteresting stats while someone is dropping in a bomb are extremely annoying), but then I was elated to see Dave Kalama on the desk. In big contrast with Stanfield's, Kalama's comments were extremely interesting. I wish they would hire him permanently.
I would recommend to take a look at the highlights video on the WSL website if you missed the action.

Honolua was firing too, unfortunately I don't have photos of it, because most photogs were at Peahi. I wanted to go, but then the competition (and Kalama) kept me glued to the video.

Below are the graphs of the buoys.
The NW buoy peaked at 17f, the Hanalei one at 15, the Waimea and Pauwela ones at 12. That is an unusual and non linear decade. 3 feet down from Kauai to Oahu and no decay from Oahu to Maui is something that doesn't make any sense, and sometimes (many times, actually) that's just how it is with the waves.

Wind map shows the massive fetch that is generating Wednesday's swell which is going to be the last of the series. The convey belt of storms, in fact, is about to take a break and the next big NW swell - at the moment - is predicted to hit around Christmas time. Have a run of the windity thing (link n.2) and check yourself.
It also shows yet another fetch down south in the same unfavorable position (with New Zealand in the way). Tomorrow this one should be a bit better. 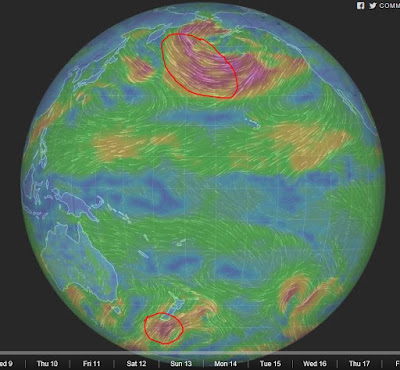 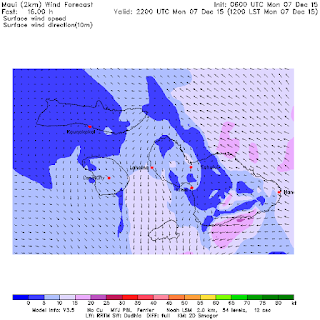 But windsurfers and kiters shouldn't worry too much, since the windguru table keeps showing trades for many days out. Wednesday should be a good day for sailing Jaws, if you're into doing/watching that. 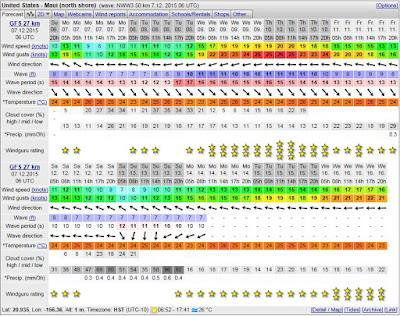 With the wave forecast ﻿the way it is, here's my unnecessary/uninteresting prediction of how the Pipeline contest will go: Tuesday too small, Wednesday too big, they will run and complete it Thursday, Friday and Saturday in progressively declining waves but raising drama. After that, in fact, there's no swell till the end of the waiting period.
Posted by cammar at Monday, December 07, 2015

GP, if you have time (and interest) I would be really interested why Peahi is so special, what swell directions it works in and any other trivia about the spot. It seems like the usual explanation - a reef at a certain depth - would occur more than once along the north shore.

What I read is that there is kind of an underwater canyon outside of it that channels the energy in that one spot and that's why it's bigger than anywhere else. That's all I know, sorry.

Thanks. I poked around google to see if I could see the seafloor but didn't find maps. Will poke around. Love the blog.